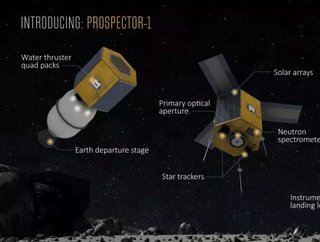 Deep Space Industries has announced plans to fly the world’s first interplanetary mining mission. Prospector-1 will fly to an asteroid near Earth and investigate it to determine its value as a source of space resources.

It will be part of two Prospector missions, the other being Prospector X, an experimental mission to low Earth orbit that will be used as a test for key technologies needed for low cost space exploration and will launch in 2017. Prospector-1 will follow before the end of this decade and travel beyond the Earth’s orbit to begin the first space mining exploration mission.

The asteroid that Prospector-1 lands on will be chosen from a group of top candidates, selected by the asteroid experts at Deep Space Industries. Once it arrives, Prospector-1 will map the surface and the subsurface of the asteroid, taking visual and infrared imagery and mapping water content. Once this is complete, the spacecraft will attempt to land on the asteroid, measuring geophysical characteristics.

“During the next decade, we will begin the harvest of space resources from asteroids,” said Daniel Faber, CEO at Deep Space Industries. “We are changing the paradigm of business operations in space, from one where our customers carry everything with them, to one in which the supplies they need are waiting for them when they get there.”

The Prospector missions will demonstrate DSI’s low cost, high performance approach to space exploration. The prospector platform is now available to government and commercial explorers interested in developing low cost mission of their own.