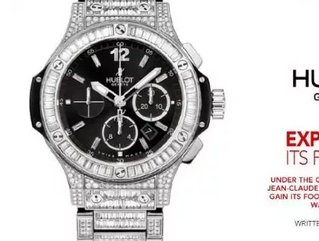 Click here to read this article on our interactive reader in the July issue of Business Review USA!

Hublot caters to an uber-exclusive clientele and crafts approximately 25,000 timepieces annually at its Nyon, Switzerland manufacturing centre with price points the hoi polloi may have difficulty comprehending.

Emblematic of its elite status, Hublot unveiled the world’s most expensive watch during March’s Baselworld 2012 Show – a $5 million white gold jaw-dropper laden with 1,282 diamonds that was sold to The Hour Glass boutiques in Singapore for display in their Hublot corners.

Now robust and innovative, the company founded in 1980 by Carlo Crocco had grown stagnant, relegated to secondary status as the industry heavyweights (Rolex, Franck Muller and Audemars Piguet et. al.) competed for top billing. Hublot’s turnaround coincided with the 2004 arrival of dynamic Chairman Jean-Claude (JC) Biver, who displays the symbol of his passion and boyhood dreams – a working scale-model of a steam engine he built as a child that his parents recently found and had rebuilt – prominently on his desk.

“My passion [for watch making] and the passion of my people are contagious. If you’re close to someone with passion, he will give you also part of his passion,” reasons Biver, 63. “Then everyone starts to get passionate. We have to be different. On every project, we say are we first, are we unique and are we different?”

Hublot has amassed numerous awards since the 2005 introduction of the Big Bang chronograph, winner of the Best Design award in the Geneva Watch Festival’s “Grand Prix d’Horlogerie” competition. Hublot’s Oceanographic 4000 won the Active Lifestyle Watch Award at the Starhill Gallery Awards in Kuala Lumpur in December 2011; and the company won the Walpole Award for Excellence in the International Luxury Brand category, presented in London in November 2010. Biver has also garnered numerous individual awards.

Hublot is the official watch of Formula One and Ferrari as well as the official timekeeper for the FIFA World Cup (2010, 2014) and UEFA Euro 2012 competitions and maintains alliances with Manchester United of the English Premier League and the World Boxing Council.

Why the affinity for Formula One and Ferrari?

Biver has a well-documented history of conquering challenges. As co-owner, he bought and re-launched the Blancpain name in 1982 before selling it to what would become The Swatch Group (formerly SMH Group), then oversaw the revival of the Omega brand while at Swatch.

Crocco sought him out in 2004 and Biver jumped back into the fray, truncating a planned sabbatical. He scrapped Hublot’s processes, removed quartz batteries from the equation altogether and returned to the time-honored Swiss tradition of fine watch-making by highly-skilled craftsmen.

“We were in 2005 very much like a start-up and we just had the DNA, a watch with the shape of a portal. So, we had a very clear idea and the DNA. Besides that we had nothing – we had to build the company from A to Zed,” recalls Biver.

“We looked at the product of 1980 and we face-lifted the product. We said what would have been the evolution. We made a simulation and we came out with this result,” Biver says, smiling broadly while pointing to the Big Bang enveloping his left wrist.

Given the choice, Biver comes down on the side of research and development over marketing every time.