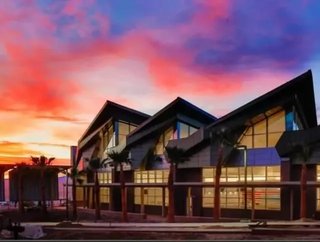 Family firm Martin-Harris Construction, 40 years from its foundation, has been sold and is undergoing profound leadership change: the enigma is that for employees, clients, and even the founder and his family, the transition is imperceptible.

It's not uncommon for an entrepreneur to emerge when their career path becomes blocked. Others might be content to wait, but a livelier mind will look for another way. That's what happened when 29 year-old Frank Martin, a carpenter by trade and with twelve years' experience, was overlooked for a promotion that should have been his. That was in back in 1973. Martin, taking a break on a scaffold at the Las Vegas building site he was working on, shared his frustration with his younger colleague and fellow carpenter Frank Harris, who threw out the suggestion that they set up in business together.

The partners developed the idea and decided that general contracting was the field they should break into. Martin set about beefing up his qualifications, and together they purchased a rundown property. “We used our carpentry skills to fix the house up,” he recalls. “We paid ourselves nothing but made $15,000 on the deal. With $7,500 of that we bought a piece of ground, which my wife and I still own today, and with the other half we started the company.”

Even in the early 1970s that was not a huge amount of seed capital for a business but together with a good name in the Las Vegas construction business it was enough to enable them to incorporate Martin-Harris Construction in 1976. 40 years later it is a $200 million a year business, and having grown with the growth of the city is one of the best trusted names in Nevada.

Admittedly Las Vegas was much smaller then, with fewer than 400,000 inhabitants compared to over 2,000,000 today. With no business qualifications and no knowledge of accounting practices, the business had to fall back on indispensable assets such as integrity, common sense and a good knowledge of the local construction scene.

“A long time ago I learned the simple three-part business guideline; you have to get the work, do the work and keep score. I was a very good 'get work' guy, we were both very good 'do work' guy, and our very first employee was the ‘keep score’ person.”

The three vital functions of business development, operations management and accounting, then, were filled respectively by Frank Martin, Frank Harris and their bookkeeper, who stayed with the company till 1990. In December 1979 Martin bought out Harris, though he too continued to work in the company until the early 1990s, and since that date Frank has been the sole proprietor of the company – until very recently, that is.

In the early days it was difficult to get work. Martin relied on building individual private homes, work for the local churches and a certain amount of work for the city authority. “In those days Las Vegas was a very different kind of a city from today,” he explains. “Development money was basically controlled by five or six families. Those families did not really start doing business with us till we had been going for around a year.” Finance had to be arranged on a case by case basis, and he admits that at the outset he didn't have a clue what 'bonding' meant.

That was a deficiency that had to be remedied if the business was to scale up, as owners invariably secure large projects with construction and performance bonds to take out the risk of contractor failure. Frank met an insurance agent who introduced him to the small business network in Las Vegas, which enabled him to bond his first job for the city.

Networking was a vital skill in the days before construction industry organizations like NCA and NAIOP came, he stresses. And once they had Martin-Harris on their radar, the controlling developers began to think of the rising construction firm when growing their real estate portfolios. Martin speaks of his long association with Irwin Molasky and his family, with the America Nevada Corporation under the Greenspun family, and with that later arrival in the Valley the Howard Hughes Corporation, for which at one time he had 11 projects under construction at the same time.

“These were just shrewd businessmen who would see an opportunity and seize it. They played straight, but those guys surely had influence: most of the private sector construction jobs depended on them.”

Martin-Harris's portfolio includes schools, hospitals, civic buildings, retail stores and offices. It also includes projects you'd expect to find in Las Vegas, such as the recently completed, $40 million, 200,000 square foot expansion for Konami Gaming, a slot machine and systems development company. It's adding to a building Martin-Harris had built for them ten years earlier - returning customers are a sign of a healthy company, Martin points out.

For another major client, Ainsworth Game Technology, Martin-Harris  built its $30 million headquarters for the Americas to reflect quality, innovation and excellence. The 300,000 square foot facility is in the ‘Gaming Manufacturers Corridor’ a few minutes from the Las Vegas strip on Sunset Road. It's tempting to talk only about the higher profile projects, but some are more utilitarian. The company recently completed phase one of the Lone Mountain Corporate Center, a new warehouse and distribution facility that will cover a staggering 690,000 square feet.

With the company approaching 40 and himself approaching 70, Frank Martin is as energetic as ever. However, the question of succession is one that every family business has to face sometime, and over the last month that question has been addressed at Martin-Harris. Perhaps the obvious thing would have been for him to just hand over the reins to his son. Guy Martin started at the shop floor, working on one of the family's construction sites from a young age and dreaming of following his father's footsteps to learn the carpenter's trade.

“I started working for Martin-Harris the summer I turned 13,” he says, “at the Toys R Us store here in LV. I was hooked and grasped at every opportunity to learn the business of construction and every aspect of the construction industry I could. With the wide variety of market sectors we serve, every day offers a challenge and the opportunity to learn the equivalency of a masters degree.”

Had it been a question of just signing over the business, this being a private company, the bonds for major contracts have to be secured on Frank Martin's personal wealth. Under anyone else's ownership it would only have been possible to bid for smaller contracts, and the company would have shrunk. So when in October 2013 Frank received an unsolicited call from the president of one of America's leading construction groups the billion dollar Big-D Capital Corporation, a solution suggested itself that might secure the firm's ability to bond far larger projects, while securing the family interests and the jobs of a loyal workforce.

After further discussions a letter of intent was signed in July of 2014, with the full co-operation of Frank's wife Bonnie, Guy – who by then had been appointed senior vice-president – and his other son Jerrad – an independent contractor in his own right. The senior employees were brought in on the deal without delay.

The deal was closed in November 2014 and Martin-Harris became an independently managed subsidiary of Big-D Capital. The event made a big splash in the construction industry press that day, but then the press went quiet. “Nothing changed,” says Guy. “We all came in to work on the next day and did what we always do. Nobody working here noticed any difference, and they don't today.”

This was because the acquiring group had no desire to interfere with success. “It is a real testimony to our people that they had the faith, first of all in myself but also in Guy and our people, to continue making this place one that is unique both to work  for and to do business with,” explains Martin.

Emotionally, Frank admits that the transition from owner to president was tough. “I think many family companies decline because they hold on too long.” 16 months on, another change took place on May 2 when the presidency passed from father to son. Both say that they are still trying to figure out exactly what this means, but once again neither employees nor clients are likely to see any change.

“The feedback I've had from the industry is they are really happy for my dad,” says Guy. “They see him as a man who has dedicated his entire life to building an amazing place for great people to live out their careers: he was able to find a company to come in that cares as much about his legacy as he does, cares as much about people as he does, and allows him to shed some risk while still staying directly involved in the daily development and execution of a succession plan. I would say that our acquiring entity is a photocopy of us, just ten years down the line.”

Now the company will go forward under Guy's leadership as President, with Frank serving as CEO for the short term and committed for the next five years as a consultant. Don't get the idea that the last two years have been without challenges, but in overcoming them their relationship has grown. “I think that through Guy's patience and my wisdom we have been able to work through both challenges and opportunities,” says Frank, while Guy adds: “I feel in my heart a sense of duty to everybody who works for the company. When my father and I get in a room and have the opportunity to talk about the real issues, great things happen – and look at our associates in the company; they go out and do amazing things every single day.”

Generational issues arise from time to time, he admits, but these are not unique to Martin-Harris. “Throughout the construction industry, like the Molasky companies for example, the older guys have apprentices and assistants under them they are mentoring, bringing along and inspiring and they are going through the same processes that Martin-Harris did. They have the same generational convergence to deal with, and we are all doing it together.”

Frank Martin has other businesses to which he will now be able to dedicate more time. He also looks forward to supporting the church activities that are a priority for him as a committed Christian, and other charity work.