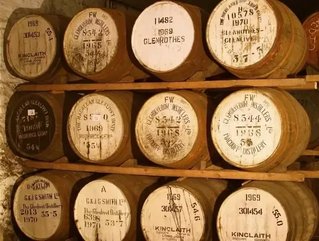 Moji Shand’s career journey is an unusual one.

How does an LA criminal law attorney and supervisor to 90 other lawyers drop everything to become CEO of a whisky company in Scotland? Discovering new passions can happen at any time of life, and for Shand, a love of whisky occurred as she took a break from her job and went travelling across Europe.

“Criminal law can be very tolling and stressful, and in 2006 I wanted out,” Shand explains. “My boss put me on a leave of absence and I decided to travel. A friend of mine, who happened to be Duncan Taylor’s scotch importer in the US, was in Scotland doing a whisky tour and invited me along. I met Euan Shand, we did some bottling, and I took a cask of whisky back to the states with me. Getting this glimpse of the whisky industry, it was love at first sight, and I thought ‘I want to get onto this’.”

While Duncan Taylor was new to Shand, it had a long history whose legacy had recently been revived. Founded in 1938 in Glasgow, it began as a cask broker and trading company, and was taken over by an American named Abe Rosenberg, who opted to keep most of the company’s casks as a private collection. Upon his passing several decades later, Rosenberg’s children didn’t know what to do with the collection, and didn’t want to break it up, and so they sold the thousands of casks to Euan Shand. Taking Duncan Taylor to his hometown of Huntly, he began to trademark the brand, and it swiftly regained the interest it had lost during years of obscurity.

Almost grudgingly, Shand returned to her job as a lawyer, and found that the passion she used to have for the role was no longer there. She had discovered it elsewhere, and spent her spare time searching for Duncan Taylor products and visiting distilleries and whisky shows. Regardless of the fact that most people in the whisky industry are born into it, Shand considered it her calling, and was determined to become part of it.

Shand’s initial idea had been to open a Scotch whisky shop in the US, but she hit a stumbling block as her relationship with Euan Shand developed, and they ended up marrying.

“I couldn’t qualify legally to open up a shop due to US laws,” says Shand. “America considers me a company owner and producer by virtue of marriage, and I wasn’t able to become a retailer as well. I had to surrender my license before I could even open the doors, but I had enough knowledge by this point to become an importer, and I reached out to Peter Currie at Springback Distillery – who I had also met during my initial trip to Scotland – to ask if he’d relocate to LA and help me. He had only just got married and had a baby, but after discussing it with his wife, he agreed!”

Thus came Shand Import. The US was already a big customer for Duncan Taylor, and many other small importers were being bought out by bigger corporate companies, but Shand Import played on the fact that it was both traditional and stylish. While the craft spirit industry is only recently becoming fashionable, Duncan Taylor was an innovator

“Everything we do is handmade; we are craft,” Shand says. “The attention to detail that goes into the products during every point of production is extraordinary, and that comes from passion. You need passion, not big corporate backing. Shand Import started with just me and Peter, and we turned income around from $200,000 a year to $4 million a year. And the team is still only six people. It’s still continuing to grow and I couldn’t be more proud of it.”

While Shand Import is a high priority, Shand certainly spends plenty of time getting stuck in with production on-site at Duncan Taylor’s headquarters in Huntly, Scotland. To lavish equal attention on all sides of the business, Shand and her husband travel between LA and Huntly regularly, and delegate work to their talented and trusted team from wherever they are in the world.

“Because I’m the US importer, it’s helpful for me to spend time on-site in Scotland, pick the casks I’m interested in, watch the bottling, and to relay back to my customers what we have available. Plus I’ll always roll up my sleeves and get involved with production during busy times. The staff in Huntly, I don’t need to be their mother and watch them all the time – I have complete trust in them.

“Thanks to advancements in technology, communication is pretty simple; in Scotland, I start the day at 8:30am and often work late into the evening, because by 4pm, the US team is up and asking questions. When I’m in the US, I’m up at 6am so that I can get in bed with the UK team until about 9am when they shut off. That can be tolling if you don’t like it, but if you love the work like I do, it’s not a big deal.”

While the logistical side of her role has fallen into a comfortable pattern, it was not always so simple for Shand. Shand faced difficulties integrating for three reasons: because she was not already part of the very small Scotch whisky industry; because of her gender; and because of her marriage to Euan.

“Scotch whisky is a pretty male-dominated industry, and a lot of these guys have known each other from the beginning. So to formulate a bond with them and prove I could do this, it took a while. I’ve been working on it since 2012, but I’m finally receiving respect from my peers. They see me doing my job and realise that I work for my title.”

Shand has added dimensions to Duncan Taylor that it may never have realised it needed, and her qualifications as a lawyer have enhanced business in unforeseen ways. For example, when Euan attempted to re-release Black Bull whisky – historically a popular beverage – Duncan Taylor ran into potential legal difficulties.

“Under Abe Rosenberg’s ownership, the trademark for Black Bull had lapsed; by the time Euan wanted to start trading it again, Red Bull was well established,” Shand says. “When I came on board, we were able to reach an agreement with Red Bull whereby we could both utilise the names of our trademarks, meaning we were able to re-launch our brand. Not many small companies have the luxury of an in-house council, but I’ve been able to jump in with anything legal and HR-related. Being a lawyer doesn’t just mean knowing law, but also having an analytical mind.

“Euan and I complement each other really well; it’s not easy being married to your business partner, and he drove this company with great force single-handedly until I joined, but now we have a great partnership and amazing staff. We really treat them like family, and I think they think of us that way too.”

Shand’s ventures are expanding all the time. As a side-project, she runs the Duncan Taylor Boutique, which took the place of the whisky retailer she had hoped to open before her marriage to Euan scuppered that plan. She had already paid for a four year contract on a shop, and in the absence of being allowed to sell spirits, she decided to tap into a different trend by using casks to create furniture and art.

“Life had handed me lemons, so I turned it into lemonade,” Shand says. “We have a lot of vintage casks which we were just cutting up and using in our fireplace, which seemed a shame. Nobody was making furniture with whisky casks, so we started doing that, and the shop has now become a destination for everything Scottish in LA. In the future, I’ll be introducing an espresso bar to the shop too; the smell of whiskey from the casks mixed with the smell of coffee is going to be incredible.”

Duncan Taylor itself is also part way through building more bottling warehouses, as demand for Scotch is ever-growing. The company is in full production 24/7, and as such is in a good position to expand, leaving Shand and her husband to continue running it with the strong partnership and unique brand of leadership they have cultivated.