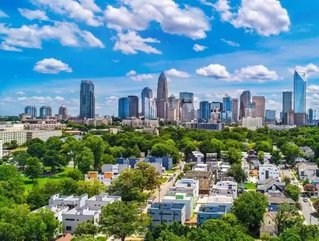 Officially founded in 1768 and named Charlotte Town as a tribute to Queen Charlotte of Mecklenburg-Strelitz, the wife of King George III, Charlotte is a city of both tradition and revolution. Home to 860,000 people, NBA team the Carolina Hornets as well as the NFL’s Carolina Panthers, Charlotte is also, according to Mental Floss, the Pimento Cheese Capital of the world. The North Carolina city may have a rich connection with its past (including a local belief that the town issued its own declaration of independence from British rule a full year before the rest of the thirteen colonies) but the government and people of Charlotte have eyes firmly fixed on the future.

Starting in 2010, Charlotte has undergone a transformative journey into one of the world’s smartest cities. Ranked 20th on the global smart city rankings in 2018 by the Eden Strategy Institute, Charlotte places ahead of modern metropolises like Copenhagen, Washington DC and Vancouver with a successful clean energy program that achieved a 19% reduction in energy consumption. Also, according to the report, “the city designated the North End Smart District (NESD) as a comprehensive first step to piloting smart city initiatives on a large scale, engaging and partnering with community leaders and residents, companies and entrepreneurs, non-profits, and City departments.”

Situated between North Davidson Street and Atando Avenue, the North End Smart District is made up of eight neighborhoods to the north of the city’s uptown. According to the City of Charlotte, the District aims to be “a community that uses data and technology to make decisions that impact mobility, safety, energy, public services, education and environmental health”. Supported by governmental initiatives, Charlotte’s startup scene has grown into one of the most vibrant entrepreneurial ecosystems in the country. As of October 2018, the city is home to three unicorns - startup companies with a market valuation of over $1bn. Business Chief takes a look at three of the Queen City’s greatest success stories.

Founded in 2000, AvidXchange is an industry leader in automating invoice and payment processes in the real estate, financial services, energy, and construction sectors, according to Bloomberg. The company became a unicorn in July 2017, making it the second-oldest of the three.

In January 2019, Extent Research named AvidXchange as one of the top players in the Global Check Printing Software Market. In the same month, the company announced plans to invest $41mn in Mecklenburg County, expanding their Charlotte Headquarters to create at least 1,200 new tech jobs on the periphery of the North End Smart District, according to the North Carolina 100.

“We launched AvidXchange 18 years ago in a coffee shop in Charlotte with five employees. Since then, we’ve grown to 1,200 employees and we’re proud to call North Carolina home,” AvidXchange CEO Michael Praeger said. “I’m thrilled to have the State’s continued support as we look to double our employee base in the next five years.”

Also founded in 2000, Red Ventures was the first Charlotte startup to attain unicorn status in 2015. The company operates a portfolio of technologies, digital assets, and strategic partnerships that connect consumers across three continents to brands like Bankrate, creditcards.com, the Points Guy and NextAdvisor.

In January 2009, Ric Elias, co-founder and CEO of Red Ventures, was on board the infamous crash landing of US Airways Flight 1549 on the Hudson river. On the 10th anniversary of the crash, Elias talked with Forbes magazine about the ways in which the event changed both his life and the future of Red Ventures.

“For starters, the plan for Red Ventures completely changed after the incident,” Elias said. “We went from wanting to build a company that we could sell to deciding that Red Ventures will never be for sale. We turned the company into a perch from where to live a life. This freed us from outside expectations. It gave us the freedom and creativity to explore all sorts of new ways to build a company.”

Currently, Red Ventures employs 3,600 people across 13 offices worldwide. Although the official headquarters has since been moved to South Carolina, Charlotte remains the company’s spiritual home and second-largest base, with a large hand in the local community and Charlotte’s smart city mission. In an effort to focus on the social component of its tech transformation, the Charlotte Government runs a number of programs, including TechCharlotte: a housing and neighborhood services initiative that not only creates a new, free community technology access space, but also partners with Red Ventures Road to Hire and others to provide training and access to jobs.

After acquiring a further $50mn in funding in October 2018, predictive analytics company Tresata became Charlotte’s third unicorn, with a total valuation of $1bn. Based in the South End of the city, the company develops software platforms for real-time customer intelligence management. Its software enables businesses to monetize customer data by collecting, curating, computing, and converting it to customer intelligence across all existing and growing data assets, according to Bloomberg.

According to a report by SiliconANGLE, the $50mn represented the first outside funding accepted by the company. Founder and Chief Executive Officer Abhishek Mehta explained in the report that he always saw revenue as the cheapest source of funding. “We have had tremendous interest from investors ever since we started the company and never found the right partner,” Mehta said in an interview. “This time, with GCP, we found that partner. With GCP, we have someone on our side who believes strongly in our vision — that in data lies the power to enrich life. We are excited about this investment, as it is a validation of the confidence our clients have placed in us from the beginning.”