Smartphones: The Latest Innovations for the Year Ahead 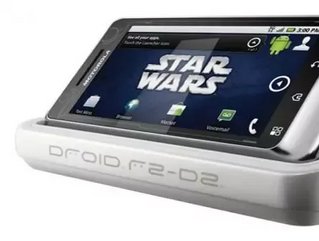 It’s about that time of year when we start to look at the latest technologies in the smartphone industry as we look ahead to the New Year. From Star Wars-inspired design to high-definition video systems, here is an assortment of smartphones looking to vie for the No. 1 spot in next year’s list of innovative mobile technology.

The Limited Edition Droid R2-D2 will definitely be topping the holiday wish list of every geek and Star Wars fanatic. The smartphone comes equipped with a R2-D2 soundboard that offers the little robot’s phantasmal screeches. Or, impress fellow geeks with the Rebel Scanner app. Got some time to kill while waiting for Star Wars 3D to come out? The phone also comes with a collection of video clips of the beloved Artoo, along with animated wallpapers. ($349.99 plus $100 mail-in rebate)

The Nokia N8 is ideal for the tech savvy and allows users to create and edit high-definition video masterpieces with a 12 MP sensor and Carl Zeiss optics and share them with colleagues and family from their phone. It comes equipped for an HDMI connection so you can show off images, videos and music on compatible televisions and projection systems in digital 720p resolution. Another feature includes Dolby Digital Plus technology compatible with home theater systems to really blow your friends away. Voice-guided navigation is also standard on the phone and the Ovi Store offers thousands of apps, games and videos for more fun. ($549)

The G2 by HTC features the Android 2.2 OS and Google Voice Actions which allows you to send a text or email, listen to music, make a call, or surf the web with voice activation. This is the first smartphone specifically designed for T-Mobile’s new HSPA+ network, which covers 100 million Americans across the country and is the first smartphone to integrate Google Voice to transcribe voicemails to text. Currently, the phone is only offered through T-Mobile. ($199.99 with two-year T-Mobile contract)

The uber-sleek BlackBerry Torch 9800 is equipped with 8 GB of memory, an enhanced music player, 5 MP camera with flash, video recording, integration of social networks and RSS feeds in one view, nearly six hours of talk time before a battery recharge is needed, and so much more. ($199.99 with two-year contract)

Motorola and AT&T announced three new Android phones last month: the Bravo, the Flipout, and the Flipside. All three phones use Motorola’s MotoBlur overlay on top of Android 2.1, and all have 3 MP cameras and CrystalTalk Plus technology for cleaner voice quality. The Bravo and Flipside are the most conventional of the three styles. The Flipout is square with a screen that swivels up and away from the body of the phone to reveal a QWERTY keyboard. (Flipout: $79.99; Flipside: $99.99; Bravo: $129.99; all with a two-year contract)

The Sony Ericson Xperia X10 features a 4-inch touch screen, 8.1 MP camera, and music player on the 3G Android operating system. Timescape allows all communication to be integrated into one location and users can store music, photos and videos online or in the phone with Mediascape. ($349.99)

BACK TO THE FUTURE
While many manufacturers are creating user-friendly smartphone designs, those using the right sides of their brains have come up with some pretty modern designs for mobile phones. While the following are just design concepts, who knows if any of these designers will make the future’s list of innovative smartphones?

The Seabird, designed by Billy May of Mozilla Labs, conceptualized a phone with an 8 MP camera, wireless charging, mini USB, and a built-in removable Bluetooth headset that acts as an infrared tracking remote. An additional docking station uses the phone’s dual projections to cast a keyboard and computer screen for a truly “open web” mobile phone experience. You have to see the video to believe it.

The Nokia Kinetic was designed by student Jeremy Innes-Hopkins and features the phone’s unique ability to “stand up” when a call or text is received by “converting digital information into kinetic movement” due to an electromagnet shifting in weight.

Recycling at an ATM
Got a drawer full of old cell phones that are outdated and out of fashion? In order to eradicate eWaste, San Diego-based ecoATM gives money for old phones from their reverse vending machine of sorts. A consumer deposits an old mobile phone, which is valued, and dropped below into a storage unit. The user receives a coupon, gift card, cash, or can give the value as a a charitable donation. Check out the website for information and ATM locations.