The Economic Outlook for 2012 and Beyond 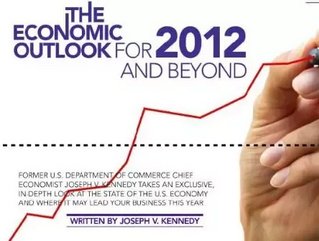 As we begin 2012, the business outlook is promising, but uncertain. While recent economic data has been encouraging, significant structural imbalances remain. A similar situation existed four years ago. In January 2008 the Congressional Budget Office predicted that growth would be 1.7 percent in 2008 and 2.8 percent in 2009.  Although very aware of problems in the financial sector, most economists did not think these would lead to a recession. In fact, the economy had already entered a recession and would not emerge for 18 months.

Once again, the consensus outlook anticipates slow, but accelerating growth. Despite the presence of continued financial imbalances in both the national and global economy, few economists predict another recession in the United States. The hope is that these problems will remain relatively contained as the rest of the economy reasserts itself. But this will require a bit of luck and good governance.

In addition to the problems in Europe and elsewhere, the United States faces a series of domestic imbalances. These include: 1) the continued backlog of distressed real estate; 2) unprecedented increases in its fiscal deficits; 3) the inability to pay promised retirement benefits; 4) unsustainable entitlement programs. Each of these is the result of bad policy choices in the past.  Yet policy makers have largely tried to manage the effects of these imbalances rather than deal with their underlying causes. But continued indecision merely prolongs economic uncertainty and weakness in the financial sector. It also creates a risk that an unexpected default by a government or large financial institution could trigger another economic collapse.

Barring such a collapse, we should expect a gradual return to normal growth.  According to the latest data, although GDP growth collapsed to just 0.4 percent at the beginning of 2011, it rebounded to 1.8 percent in the third quarter, still well below the pace of 2010. However, much of this variation was due to the changes in government spending and private inventories, which have affected GDP significantly since mid-2009.  The performance of the “underlying” economy (consumer spending, private investment, and net exports) has been much more robust (See Chart). A look at domestic profits shows that the recent recession was largely caused by problems in the financial sector. Most other corporations were only secondarily affected.  Imbalances in the financial sector and government remain the chief threat going forward.

Unemployment has always been a lagging indicator. Although the recent drop in the employment rate looks promising, it is mainly due to a decline in labor force participation. Had labor participation remained constant during the year, unemployment would have been 9.3 percent instead of 8.6. There is little reason at this point to think that employers will create enough jobs to make a serious dent in long-term unemployment between now and the elections.

Over the next year we can expect fiscal policy to remain relatively static.  Beyond an extension of the payroll tax cut and unemployment insurance, the outlook for additional stimulus is dim.  The outlook for a serious program to increase infrastructure investment, limit entitlements, or reform taxes is nil given the lack of presidential leadership and the approaching elections.

The Federal Reserve has signaled a commitment to hold interest rates low well into 2013. But unless the economy deteriorates, it is unlikely to engage in further quantitative easing despite support from a number of governors. The outlook for exchange rates is less certain. Financial uncertainty in the rest of the world has caused investors to flee to Treasuries, causing an appreciation in the dollar and harming exports. But should the perceived risks fall, investors will once again seek higher returns, allowing the dollar to find a new, likely lower, equilibrium.

$25 Billion Mortgage Settlement: Is It Enough?

Why U.S. Business Should Watch the Eurozone Economy Crisis

Despite its troubles, the United States remains a rich nation. Americans continue to spend an enormous amount on discretionary items including sports, pets, and entertainment. America also remains the most competitive nation.  Economic growth proceeds in cycles. During the downturns it is easy to focus on our problems. Yet despite its woes, the United States has incredible strengths. Other regions, including China, face the future with worse challenges and fewer assets. Our legal and financial systems remain the most hospitable for business. Our economic system remains the most competitive and open, relatively free of the government interference that hampers Europe and the developing countries. Most importantly, our scientific and technical base remains the best in the world. Much of this is due to the strength of our research institutions and our openness to immigration.

America’s challenge is to confront its imbalances proactively rather than wait for the financial markets to force a solution on us. Even in the best of circumstances, the economic pain will last several more years. But the underlying strength of the country remains intact. Once freed from the paralysis of uncertainty, consumers will rebuild their savings and then resume their pursuit of better living standards. Businesses will follow their lead and begin investing the large accumulated profits they have amassed over the years.  Every downturn has its upswing and each upswing tends to be higher than the one preceding it.  We should expect nothing different.

About the Author: Joseph V. Kennedy is a former Chief Economist for the U.S. Department of Commerce.  He has provided economic and legal advice to private and public sector executives for over 25 years.  He can be reached at [email protected]