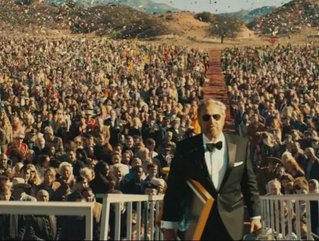 There comes a time in every brand’s life when its marketing campaign must be refreshed, or risk growing stale and increasingly ineffective. For Dos Equis, that time is now. While its “Most Interesting Man in the World” campaign has been exceedingly successful over its nine-year run—the Heineken-owned brand reports that its sales tripled in the U.S. since 2007—the campaign is ready to evolve. But not without a proper sendoff befitting of the campaign and its mascot.

Today Dos Equis launched its final commercial with actor Jonathan Goldsmith, the face of the “Most Interesting Man in the World” campaign, on YouTube. The ad shows the man, myth, and legend embarking on a one-way journey to Mars to seek out new unexplored adventures in the great unknown. On March 10, the brand plans to debut the ad on TNT during the Cleveland Cavaliers and Los Angeles Lakers NBA game. From there, Dos Equis plans to launch a series of shorter tie-in commercials, along with fan promotions and giveaways leading up to a final Cinco de Mayo.

With that said, Dos Equis notes that this is not the end of the campaign but an evolution. The brand has promised to reveal a new Most Interesting Man in the World later in 2016—and if KFC has taught us anything recently, it’s that the only thing better than a long-running mascot is a mascot that can fluidly transcend the persona of one spokesperson alone.

“From superheroes to superspies, our fans are accustomed to and enjoy different takes on the same character. We know ‘The Most Interesting Man in the World’ will continue to endure and grow, as the character’s story is bigger than one individual,” said Andrew Katz, VP of Marketing for Dos Equis. “Stay Thirsty isn’t just a tagline – it’s a mindset Dos Equis embraces daily to connect with our consumer and inspire everything we do.”

Check out the ad here: