The 5 Most Business-Savvy Athletes 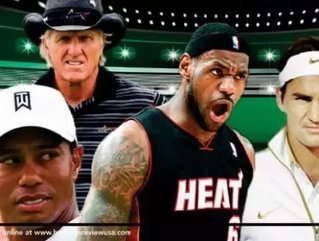 Written by A. Selway Ryan

For these five player-entrepreneurs, the real payoff is even sweeter than the wins.  Here’s who made it big off making it big – and how they did it.

She Got Game, Set, and Match

With her fiery charisma and dominating presence on the court, Venus Williams has the will to win at anything she sets her mind to – and she’s set her mind to an awful lot.

Besides being one of the best tennis players in the world – she’s ranked No. 3 for singles and No. 2 for doubles – Williams is also the CEO and founder of interior design firm V Starr Interiors.  She also has her own fashion line and is part owner, with her sister Serena, of the Miami Dolphins.

She pulls down over $15 million just for playing, and another $40 million from an endorsement contract with Reebok.  And incidentally, she’s a New York Times bestselling author, for her book Come to Win.

Remember the Facebook movie?  ‘A million dollars isn’t cool.  You know what’s cool?  A billion dollars.’  Tiger Woods is, by any measure, cool, having netted over a billion dollars in salaries and endorsements since he started his career as the Mozart of golf.

But since his many marital infidelities came out, he’s become a bit too cool for school.  He got drunk and crashed his car, made a humiliating public apology for his above-the-law behavior, and got a divorce that cost him north of $100 million.  It’s no wonder he’s trying to go back to Buddhism – he can’t afford not to.

His suffering may come from desire, the ones satisfied by heading a golf design firm, becoming a bestselling author, or licensing his name and image to everything from shoes to video games.  He’s credited with single-handedly building the then-fledgling Nike Golf division into the uncontested industry leader with over $600 million in sales – not to mention putting golf itself on the map of big-business sports.

Scores on the Rebound

‘Who’s Michael Jordan?’ you may hear your kids say one day, and that’s the day you’ll feel older than you ever have.  But it’s not your fault – it’s LeBron’s.  He’s 21st century, digital-age good, and the analog greats just won’t cut it.  He was drafted out of high school as the new Jordan.  Even Jordan had to work at being Jordan.

He makes the salary cap in basketball, so there’s no reason he wouldn’t play the field a little – just don’t tell that to a Cavaliers fan.  Wherever he ends up winning his first title, it’ll probably be the first of many.  He already has an Olympic gold medal – and he’s still only 27.

But that hasn’t stopped him from monetizing the money shots in a big way, with endorsements from Nike, McDonald’s, Sprite, and others that triple his annual salary.  To make things simpler, he owns his own marketing agency.

Hey, Cleveland may scold – but he’s got the gold.

Aside from being the greatest tennis player of all time, Roger Federer oozes style – and the world’s biggest luxury brands have taken note.  With endorsements from Credit Suisse, Gillette, Mercedes-Benz, Nike, and Rolex, among others, Federer has one of the most lucrative portfolios in sports.  Not bad when you’ve already won $56 million in prize money alone.

With a racket in his hand, he’s unstoppable:  record-setting sixteen Grand Slam singles titles, one of only seven people who’ve won the career Grand Slam, and one of only three people who’ve done it on three different surfaces – clay, grass, and hard courts.

Switch the racket out for a bankbook and that career grand slam gets metaphorical: his ten major endorsement contracts add over $40 million to his annual salary.  One way or the other, Federer Express delivers – big time.

It’s not just because he’s Australian that they call him ‘The Shark.’  It’s because he likes them, often references them, and called his multinational corporation Great White Shark Enterprises.  It might be incidental that he’s known for tearing into the competition – on the course and off.

A World Golf Hall of Fame inductee, Greg Norman never really left the course after his professional career ended: now, as the head of Greg Norman Golf Course Design, he makes them.

The company has produced 60 courses worldwide and has another 58 in development, and associated company Medallist Developments even designs and constructs whole communities around the courses.  When the current projects are completed, they’ll have a total value of over $4.5 billion.