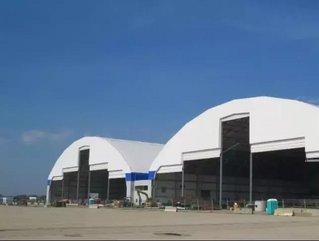 The Chicago Rockford International Airport is the third largest airport in the state of Illinois, home to 30 industrial tenants and vendors as well as being the largest regional parcel-sorting facility in the UPS system. Serving both commercial passenger domestic/international flights and cargo flights, the Chicago International Rockford Airport is continuously evolving and investing in the future, with the construction of two 100,000 sq. ft. aircraft maintenance and repair hangars as well as an additional passenger terminal space.

The process of constructing a new maintenance and repair hangar was born out of an anticipated increase influx of larger cargo aircraft heading into the Chicago Rockford International Airport. Following feedback from the large cargo operators, a strategy was developed.

“The issue that seemed to come to light was if cargo operators brought a large aircraft here such as a Boeing 747-8 and it had a maintenance issue, they were concerned that there wasn’t anybody here at the airport that could address those maintenance needs or to repair the aircraft before departing,” says Jeff Polsean, Economic Development Manager at Chicago Rockford International Airport.

“So as our Airport Director Mike Dunn looked at that process he discovered that in order to have a maintenance repair type MRO here you needed to be able to train Airframe Maintenance and/or Powerplant mechanics. (A&P)”

Rock Valley College does just that. In 2015, a state of the art 30,000 sq. ft. Aviation Maintenance Educational Facility as part of the Junior College was opened within the Airport, providing the Rockford community with 120 future A&P mechanics a year. The repair and maintenance facility was$40 million collaboration between the airport Authority and AAR, a leading provider of aviation services on a global scale.

“One of the things AAR has not had in previous developments was a hangar
specifically built for their needs and operations. In the past they would find an old military aircraft hangar or a used hangar from a commercial operation, revamp it and set up their operations there. We were able to work out terms with AAR for a lease and the airport decided to build two hangars, each a little under a 100 000 sq. ft. apiece, able to occupy largest aircraft, like a 747-8 or an airbus A380,” adds Polsean.

The maintenance hangars project started in July 2015 and is on schedule and within that original $40 million budget, but as with most large scale development projects there has been some turbulence along the way.

“The major challenge of course for any taxing body such as the airport authority is to be able to fund a project like this,” Polsean explains.

“Fortunately, Director Dunn was able to put together a financial package with the city of Rockford and Winnebago county, the airport authority, federal government and the state of Illinois. This allowed us to build and lease back the facility to AAR.”

Throughout the process however, there was a freeze on state government funding due to some budgeting issues – up stepped the Rockford community.

“Actually, five local banks stepped up to the plate and we were able to work out a deal with the banks where they have given us a $17 million line of credit. When the state wraps up the budget issues we will pay the banks back,” adds Polsean.

“It has become a huge community effort in order to see this project go forward and reach completion.”

Collaboration with and supporting the local community is one of the major driving forces for Rockford International Airport.

“From a community standpoint, which is what the airport is concerned with, it is about building and strengthening our workforce and providing an opportunity for individuals to have a quality of life here in the U.S and be able to raise a family and buy a home,” Polsean says.

“The Illinois workforce works closely with AAR in order to establish a pipeline of applicants. AAR has also worked with the Rock Valley college to specifically design a training program for A&P mechanics,” he says.

“Even our local tier-one parts suppliers such as Woodward, UTC Aerospace Systems,  B/E Aerospace, and GE Aviation they also need A&P mechanics. It’s now a consortium of local companies helping the Rock Valley college design and tailor their programs to educate the graduates and open up career prospects for them.”

Rockford is the seventh largest aerospace cluster in the U.S and the area is historically known as an industrial manufacturing supply house for the United States, supplying parts to major air operators. Polsean believes that through the local workforce development, Rockford International Airport is continuing to grow that heritage to supply the “tool and die and punch operators and engineers” of the industry.

“My saying is, if you fly in an aircraft, commercial or private, some part of that platform was produced in the Rockford region,” he adds.

Being the third largest airport in the state of Illinois alongside O’Hare and Midway, how does the Rockford International airport compete? One word Space.

“We have our own air space. When an aircraft approaches our airport, it doesn’t have to get into the Chicago air traffic control air space,” Polsean explains.

“If a cargo aircraft approaches the Chicago Rockford International airport, it would land and it would taxi and be able to   turn off its engines within three to five minutes.

“At O’Hare and Midway, as there is such a high volume going into the airport that same cargo aircraft will spend around 30- 45 minutes taxiing before being able to turn off its engine. Think of the fuel cost savings that short time generates.”

Two tickets to the future

In reducing the taxiing time, the airport allows cargo companies to unload and transport their cargos to market at a faster rate, becoming more profitable in the process.

“Going forward, we believe it’s a huge advantage in order for us to attract more cargo vendors,” says Polsean.

“We have a lot of land that we are able to develop and continue to attract new businesses.  RFD is a world-class airport with 24/7 operations, CAT II/III LS, independent airspace, hard-surface runways of 10,000 and 8200 feet that are 150’ wide with 40’ paved shoulders, with a history of avoiding service disruptions, and experiencing no weather related closings in over 25 years. Looking ahead with regards to infrastructure, we believe that this is a key advantage that we have over the other airports in the state,” says Polsean.