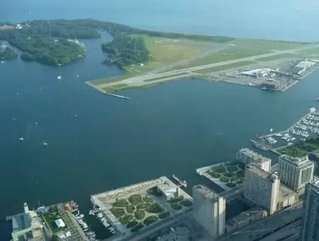 The Toronto City Council announced the approval of a Master Agreement with the Toronto Port Authority (TPA) to construct a pedestrian tunnel between Toronto and the Billy Bishop Airport located on Toronto Island.

Not only providing access to the airport, the pedestrian tunnel will also serve as a City watermain project that, once completed, will provide a long-term water supply and sewer service to Toronto Island residents, saving the City millions of dollars.

"The pedestrian tunnel to the island airport will provide a greater level of service for airport users and will be delivered at a significantly lower cost, saving taxpayers money," said Mayor Rob Ford in an official statement. "The City expects to save more than $10 million on its water infrastructure as part of this project and the Toronto Port Authority expects to save approximately $2.5 million to $3.5 million on the pedestrian tunnel portion."

Giving the TPA access to land by temporary lease and the expediting the rezoning of the tunnel’s entrance street to allow for taxi access is also part of the agreement between the Toronto City Council and the TPA.

"The City will continue to work collaboratively with the Toronto Port Authority to make the pedestrian tunnel project a reality," said City Manager Joe Pennachetti. "City staff have worked diligently to reach this milestone."

Building a cost-effective tunnel, the TPA will connect Toronto and the Toronto Island Airport across the Western Channel, saving airport customers $2.5 million.

“This kind of agreement is important, because it shows what public agencies can accomplish when they work together to come up with innovative solutions,” said Mark McQueen, TPA Board Chairman.