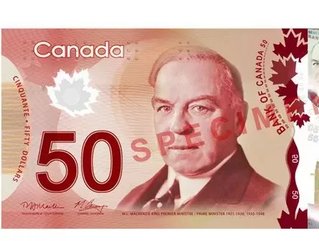 This new bank note recognises Canada’s commitment to Arctic research and development as well as its protection of its northern communities. The $50 note features the portrait of Sir William Lyan Mackenzie King on the front and depicts Arctic research ice breaker CCGS Amundsen on the back side as well as other arctic imagery. Part of the polymer, plastic-based, currency series, this new plastic technology provides state of the art security features for Canadian currency.

As a part of its security features, the $50 note features two transparent areas—one in the shape of a maple leaf while the other that extends from top to bottom of the bank note utilising complex holographic features.

“Counterfeiting rates have been reduced by 90 per cent since 2004. Issuing this new series of bank notes enables us to continue to stay ahead of counterfeiters,” Governor Carney said. “And by regularly checking the leading-edge security features on these new notes, Canadians can help protect themselves from counterfeiting threats,” he added.

The implementation of polymer bank notes is a direct result of an effort to combat counterfeiting and the maintenance of public confidence in Canadian currency explained Parliamentary Secretary Glover.

“These new polymer notes represent an important part of this effort and a significant barrier to counterfeiting. The striking imagery of this new $50 bill reflects Canada's commitment to the North,” said Parliamentary Secretary Glover.

The polymer bank note series designs reflect and celebrate Canada’s achievements whether made at home, globally or in space.

“Canada’s northern frontier has played an important role in the shaping of our national identity. And it is a true honour to have the CCGS Amundsen, Canada’s Arctic research platform, illustrated on the note in this, the 50th anniversary of the Canadian Coast Guard,” said Commissioner Grégoire.

Later this year Canadians should expect to see the new $20 plastic-based currency as well as its designs and details. The rest of the polymer series—the $5 and $10 notes—will be issued by the end of 2012.