Bet on some ponies at the Del Mar Race Track 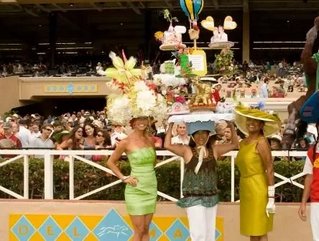 Living in southern California, it’s no surprise that summer is my favorite season. One of the reasons for my love for the sun and outdoors is the Del Mar Race Track, which is within an eye shot of the Pacific Ocean. As soon as you step foot into the paddock, there’s excitement, cigar smoking, beer drinking, money wagering, beautiful people, and goosebumps. Not because of the ocean air, but because it’s unlike anything else in Southern California.

This year’s race track season starts July 20 and closes September 7 and promises the excitement of years past. If you’re looking for a corporate hospitality locale to host your next event, or just want to take out your clients for a high-energy afternoon while betting on some horses, I highly recommend the track and the Del Mar Thoroughbred Club.

Del Mar first opened its gates in 1937 and Bing Crosby was there to greet guests. Today, Del Mar is known around the world for its race track where “the surf meets the turf.”

I can’t think of a better way to take out your employees, or even your clients, for a corporate hospitality event than with an afternoon of betting on some horses, with a cigar in one hand and a dirty martini in the other. Whether you’re taking out a group of your best buds, or treating the entire company to an afternoon at the track, Del Mar has it all.

I’d recommend renting out the Seaside Tropical Cabana for large private parties. If your clients or shareholders are in town for the week and want to experience the real summer in San Diego, rent out a skyroom or luxury suite for some exclusive partying at the track.

“Some of the other options for hospitality that exist at the track would be either the Clubhouse Terrace Restaurant or the Stretch Run Grill, a pair of restaurants that sit side-by-side and overlook the track itself,” Mac McBride, Director of Media for the Del Mar Thoroughbred Club says. “Their tables for four are among the most prized seats at the track each day, offering full dining and drinking options as well as wonderful views of the races.” Or, become a member of the Turf Club and you’ll have your own exclusive tables and facilities.

MAKE AN EVENING OUT OF IT

The Del Mar Race Track is home to an amazing summer music series for some sunset concerts. Past performances include such bands as Weezer, ZZ Top, Billy Idol, Ziggy Marley, Jason Mraz and Jack Johnson. Hollywood socialites and all-star athletes also make appearances throughout the race season so don’t be surprised if you’re bumping elbows with the stars.

Among the Hollywood celebrities who have visited the track for a day at the races over the past few years have been Kevin Costner, Richard Dreyfuss, Uma Thurman, Bo Derek, Henry Winkler, and the entire cast from “Entourage,” who shot one of their shows at the track.

We asked McBride about gambling trends with recent economic turmoil. “Betting has declined to some degree in light of the ongoing recession, but racing continues to draw fans and funds, both on site and at the more than 1,000 satellite wagering locations that Del Mar draws bets from in the Western Hemisphere,” he says. “Last year Del Mar’s bet total for its 37-day season was $448,932,160, an average of $12,133,302 per day.”

We also asked McBride about any horses and jockeys he’s favoring this season.

“At this point it is hard to know which particular horse will be coming to Del Mar,” he says. “But we do know that our $1-million TVG Pacific Classic on August 28 will attract a large field of some of the nation’s best horses. We also know that the new crop of two-year-olds – the future stars of the game – will make their debuts at Del Mar this summer. The two-year-old program at the seaside track shines the light on stars-to-be every year and this one should be no different.”

McBride also says they have one of the best young riding colonies in the country scheduled to compete at Del Mar. “Joel Rosario, Raphael Bejarano and Joe Talamo are three of the most gifted riders in the world and they’ll be doing their thing at the track this summer. Throw in aces like Garrett Gomez, Victor Espinoza, Martin Garcia, David Flores, Martin Pedroza, Patrick Valenzuela and Corey Nakatani and you know you’re going to see the best-of-the-best on horseback during our seven-week summer stand.”

I’ve got my wages all set to go. Time to go bet on some ponies!