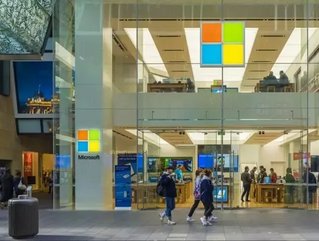 Microsoft is on the up after revealing a strong performance in its fourth quarter.

The software giant’s Azure platform is the primary driver behind some impressive figures, with revenues from cloud computing growing by 11%.

Here’s a breakdown of the figures:

-    Microsoft’s net income has more than doubled compared to the same point last year. At the end of its fourth fiscal quarter in 2016 the figure was at $3.12bn but now it stands at $6.51bn.
-    Most notably, revenues from its cloud unit rose by 11% to $7.43bn in the three months leading up to the end of June.
-    The commercial version of Office365 generated a 43% increase year-on-year.
-    Dynamics 365, its customer relationship management and enterprise resource planning service, saw a 74% year-on-year sales increase.
-    Revenues in its Productivity and Business Processes segment went up by 21%, with LinkedIn contributing £1.1bn.
-    Gaming revenue through its Xbox software increased by 3%.

There were drop-offs: its overall revenue in personal computing dropped by 2% due to sales of its Surface product, a decrease put down to ‘product lifecycle transitions’.

Chief Executive Satya Nadella’s vision for the company appears to be being realised, however, after he was appointed in 2014 to turn its flailing fortunes around.

“Innovation across our cloud platforms drove strong results this quarter,” said Nadella in a statement.

“Customers are looking to Microsoft and our thriving partner ecosystem to accelerate their own digital transformations and to unlock new opportunity in this era of intelligent cloud and intelligent edge.”

Stocks in the company initially rose by as much as 4% after the news, which surpassed analysts’ expectations, was revealed.