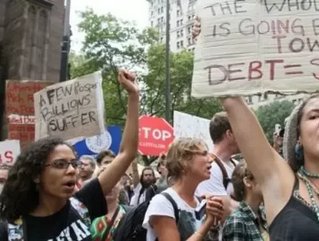 In an era of free thinkers, technology-based social lives and loud activists, there is a community who are plotting the downfall of Wall Street. It started September 17 when 1,500 protestors took to the streets near the New York Stock Exchange and now there are only about 200 on day 10 that are still standing. For the most part, people are fighting about and creating awareness of corporate greed, along with bank bailouts and the mortgage crisis. Some are even taking a note from uprisings from other parts of the world to base their protests. Currently a barricade has been set up to protect the NYSE building. Online hacktivist group Anonymous has also shed support over the demonstration and provided live streaming video of the events.

One protestor told the Huffington Post, “The enemy is the big business leaders of Wall Street, the big oil company leaders, the coal company leaders, the big military industrials leaders.” Others are protesting that the economy is collapsing or that global warming should have more focus in the mainstream and that one’s essential needs should be met.

Every afternoon, the group meets at the center of the plaza for a “General Assembly” to speak on their tactics for the following day. Because the group isn’t permitted to use a microphone, they opted for a “people’s microphone” where one person says a couple of words and the whole crowd repeats is so everyone can hear.

While the idea of tearing down Wall Street may be insurmountable, some are seeing that at least something is being when it comes to visibility of the issue – despite the reports of police brutality and peaceful arrests. On Saturday, more than 80 protesters, or occupiers as they are known, were arrested due to civil disobedience and the NYPD started using nets and physical force to break up crowds.

Occupy Wall Street all began by an Internet forum so it’s one testament to see how technology is coming into the real lives of users.