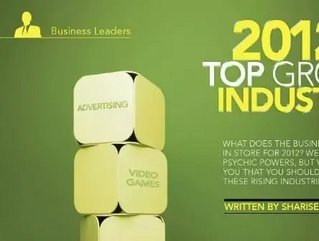 We’re not happy about it, but it is a fact that the downward turn of our economy has left many Americans in financial distress and increasingly indebted to creditors.

The debt collection industry has risen from the ashes of our economy and has experienced massive growth in the past two years. According to IBISWorld, the average debt collection agency will be generating a profit margin of 10 percent by 2015, up from about 5.9 percent in 2010. Third-party collection agencies reap the benefits when companies look to them to do the dirty work and confront debtors. And as employment and the housing market regains some footing and people are more capable of paying back their loans, debt collectors actually have something to collect.

The growth of the career training industry is a somewhat obvious extension of our nation’s economic troubles—when people are forced to leave their jobs or switch careers, they need to sharpen up their skills to pay their bills. That’s where job training steps in, taking aid from a new wave of government-funded programs to help job seekers eclipse their competition and help employers improve their odds of finding the best of the best.

As 2012 emerged, Internet retailers had plenty of reasons to celebrate. The 2011 holiday season brought the industry its strongest sales ever. In fact, online holiday sales in 2011 beat the previous year by 14 percent.

So, if the economy’s still faltering, why is online retail booming?

There are a few factors at play, but we’re betting on the increasing popularity of making mobile purchases sales from smartphones and tablets.

An IBM report found that sales from mobile devices doubled in 2011, up 11 percent from 5.5 percent. The combined power of the ease of mobile shopping and the evolution of mobile devices will surely keep those numbers climbing throughout 2012.

In February’s feature on the most expensive Super Bowl ads of all time, we filled you in on the fact that the average 30-second Super Bowl commercial slot now costs about $3.5 million dollars, excluding production expenses. Now, the Super Bowl is, if you will, in a different league of advertising exposure, but its escalating ad pricing is indicative of the industry’s development as a whole. Consumer response is increasing and analysts predict that within the next five years digital ad spending will double. Companies that can savvy up enough to throw their money into the right digital media outlets will see the best returns.

One of the main reasons biotechnology is expected to grow massively in 2012 is the fact that it has a hand in the development of a variety of other industries. Health care, crop production for food and other products and environmental consulting all rely on advancements in biotechnology to thrive. Strict regulations and even stricter allotment of funding produce challenges for the biotech industry, but it has still continued to show impressive growth through the beginning of 2012. Paragon Financial reported earlier this year that both small and large biotechnology companies had outperformed the broader Nasdaq market by a wide margin and that the industry was up more than 14 percent over last year.

Call it revenge of the nerds if you’d like, but the fact remains that the video game industry has been one of the fastest growing global industries of the last several years. As technology continues to advance, video games will simply become more complex and more influential.

Last year, US gaming industry sales hit a record amount—$18.6 billion with 15 percent growth over 2010. The PC Gaming Alliance expects that the industry will grow about 37 percent to an astounding $25 billion by 2015.

During this year’s SXSW Interactive festival, a panel on the future of games—just one of many of the festival’s gaming-focused panels—shone a spotlight on the industry’s power. A group of journalists, including Kill Screen Magazine founder and editor Jamin Warren, Matt Buchanan, Morgan Webb, N’Gai Croal and Ross Miller, weighed in on the evolution of gaming.

“I think in 30 years, we’re going to look back at the idea of holding a controller, sitting in front of a screen and think, ‘oh, how quaint,’” said Warren.

We’ve already seen a remarkable progression in the way people think about games. They are no longer tailored for tech-savvy audiences, and companies like Zynga are making games a part of our daily activities. (Anybody with a grandma hooked on Farmville can attest to that). Plus, the increasing action element of gaming is transforming it from a spectator event to a participatory experience. When people are waiting for an opportunity to play, the energy and emotion of the room changes.

What’s next for gaming? Well, nobody really really knows, but Buchanan pointed out that biometric sensors are getting cheaper, so gaming controls are becoming more advanced. The possibilities really are endless.

And of course, gaming doesn’t even always have to be all about play. Gamification has been gaining traction in education (as a means to get students thinking about innovation), business (as a means to give employees incentives for performance) and cultural institutions (as a means of embracing games as an art form).