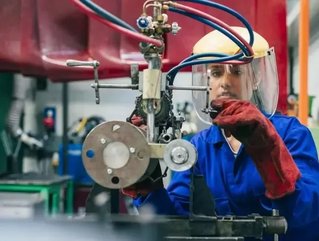 Watch out world, we've got some wildly talented women at work -- and they're fully prepared to take on the challenges of tech.

My name is Ellen Mullarkey, and I’m the Vice President of Business Development with Messina Group Staffing in Chicago. I’ve been helping to connect talented candidates with amazing opportunities in science, technology, and engineering for more than 25 years. In that time, I’ve had the incredible opportunity of meeting many, many wildly talented women. They’re here to help us define the future of STEM.

The opportunities for modern women to lead from the lab (and the construction site, and the basketball court, and the programmer’s chair) are only getting better and better: here are the top five areas where I believe you can expect excellence from lady bosses on the rise.

According to the Bureau of Labor Statistics, women earn only 18% of the computer science bachelor’s degrees awarded in the United States, and make up only 20% or so of the current workforce specializing in AI and intelligence research in Silicon Valley.

However, the industry — and those numbers — are growing. The BLS reports that computer science research work will grow at a rate of 19% by 2026. Already, we’re seeing women locking in more and more leadership roles.

“A lot of people think that technical fields and especially computing are this kind of geeky thing where people go off and do these obscure mathematical formulas that have no relevance to anything,” says Daphne Killer, an AI researcher and professor at Stanford. “What we’re now seeing is that computational methods are becoming pervasive in so many professions…there are just so many ways now to have a tremendous impact on society.”

Take a look at the full interview with Daphne — and meet some more of the women who are proudly reshaping artificial intelligence — in this feature piece from Vogue, or check out the work from ladies on this list of names to know.

Are tech startups crafted to create joy, ease, convenience, and entertainment, or are they meant to improve the general quality of life on our earth?

According to a new report from incubator Fast Forward, The State of Diversity and Funding in the Tech Nonprofit Sector, the startups aimed at inspiring social good — also known as tech nonprofits — are led largely by female founders.

These socially-savvy STEM businesses all build some form of original software or hardware, but choose to utilize a nonprofit business model so that they can dedicate pure focus on social impact.  A full 47% of the category is helmed by women! With big corporate funding coming from places like Google and BlackRock, I expect that’s just the beginning.

In a year where we’ve seen headlines from female athletes around the world, it seems like a no-brainer to address women in sports and exercise science. Serena Williams, Simone Biles — who set yet another record this past week — Megan Rapinoe and the U.S. Women’s National Soccer Team, Elena Delle Donne…the list goes on and on.

It’s about more than amazing athletes, too — female experts in sports medicine and professional coaching are also on the rise. The Philadelphia Eagles have more female executives than any other team in the NFL, with five women on the team. Aileen Dagrosa, Tina D’Orazio, Ryan Hammon, Jen Kavanagh and Catherine Carlson comprise over half of the top advisors to the owner.

Just two seasons ago, NBA Commissioner Adam Silver declared that he would work to ensure that there was a female head coach in the NBA, and do so sooner rather than later. The LA Clippers, Dallas Mavericks, and Philadelphia 76ers are already on board — as of August of 2019, these teams were all part of placing a record nine women in on-court NBA coaching roles. It’s only getting better from here.

The next generation of talent is starting small — the Girl Scouts have recently updated their “fun with purpose” curriculum to include 23 brand new STEM and outdoor badges to set young girls up for a successful future.

One of the program’s computer and technology-focused facets is built around Digital Art, with badges for Computer Expert, Entertainment Technology, Digital Movie Maker, and Digital Photographer.

Lucky for these little ladies, the field of opportunity is growing fast and furious. In Variety’s 2019 Report on women’s impact, the list was stacked with trailblazing women from digital studios of all kinds. Victoria Alonso, the Executive VP of Production at Marvel Studios; Spring Aspers, the President of Music at Sony Pictures Entertainment; Kristine Belson, the President of Sony Pictures Animation; and so many more! Have a look at the inspiring round-up right here.

“When I started in this industry, I was usually the only woman leader in the room,” she said. “This forced me to learn quickly and to be confident and direct so I could advocate for my team and my ideas. Now I see the industry changing with more and more women leading and their voices being heard. We still have a long way to go, but I’ve been a leader and advocate in making this possible as we all go on this journey in tech together. This makes proud and hopeful for the future.”

Today, 51% of the 200 employees at Limeade are women. In the meantime, Pew reports that the share of women sitting on the boards of Fortune 500 companies has more than doubled, and that 32 women headed major firms as CEO’s as of 2017 — up from zero as recently as 1995.

Together, we rise — and the future is brighter than ever.