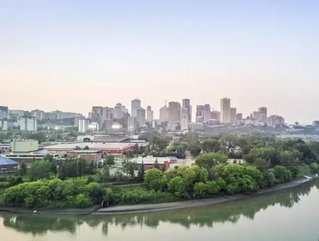 The capital city of Alberta Province, Edmonton has a population of 1.39mn, making it the fifth-largest municipality in Canada. It is the third-sunniest city in the country, along with Calgary and Winnipeg, with an average of 325 days of sun each year, according to Where Canada. Between 1981 and 2010, Edmonton reported an average snowfall of 48 inches over 52 days per year. This month, Business Chief takes a look at some of the Edmonton-based startups that are changing the way Canadians do chores, grow food and relax in the outdoors.

Formed in 1915 and disbanded in 1940, the Edmonton Grads women’s basketball team recorded a win-loss ratio of 502-20, the highest of any team in North America. Today, Edmonton remains a hub for sports, playing host to events like the ITU World Triathlon Series, and the 2018 FISE World Series, the world’s largest action sports festival. The area surrounding the city contains 93 miles of trails for mountain biking and hiking, and the 18,000 acre North Saskatchewan River Valley is the largest continuous urban green space in North America, according to Where Canada. Sport is at the heart of Canadian culture, with the national sports apparel market valued at US$1.7bn in 2018 by Statista.

Based in the West of Edmonton, technology startup Schaefer Innovation is working to revolutionize personal transportation and extreme sports, from the morning commute to snowboarding down Marmot Basin. At the 2019 Consumer Electronics Show, held in Las Vegas during January, Schaefer Innovation unveiled its latest products, two smart Multisport Helmets. The helmets (Schaefer sells either a water-resistant or waterproof model for around $280) redefine safety for cyclists, skiers and snowboarders, using rear-mounted indicator lights controlled by a remote which attaches to the handlebars. The helmets also provide hands-free phone calling and music playback, as well as local group chat with other users. If a user crashes in the helmet, built in impact sensors are also programmed to alert emergency services after a short delay. At the Edmonton Motorcycle and ATV show, company director Chris Schaefer told the Edmonton Journal that the helmets are “technology that people haven’t really seen.” Schaefer Innovation was nominated for the best new design and best innovation awards at CES 2019.

As of April, 2018, Edmonton is home to 302 food processing companies, with combined total earnings of over $350mn annually. The Alberta government has invested heavily in agriculture and adjacent industries in the past five years and Edmonton’s status as one of the sunniest cities in Canada means “the province of Alberta is rich in agricultural resources.

With about 32% of Canada’s arable land, there are more than 50mn acres of agricultural land in the province,” asserts Edmonton.com.

With headquarters next door to the Edmonton Public Library, food tech startup CanBiocin is working to change the way the city preserves its processed food. “CanBiocin is the result of the work and ideas of people from the University of Alberta,” Jake Burlet, the company’s CEO told Business in Edmonton. “The founders, Dr. Michael Stiles and Dr. Lynn McMullen, discovered bacteria that prevents the growth of bacteria that can make people sick. It became evident that it could be used commercially as a natural food preservative.”

The two founders maintain their relationship with the University of Edmonton, which provides facilities and aid to the startup, which has discovered several other types of bacteria for use in the preservation of the many crops and processed foods produced in the Edmonton area. “There are lots of reasons to be in Edmonton, including the quality of life offered here,” added Burlet. “The university continues to be important because it gives us access to world-class scientists trained at the institution, and they want to stay because of the lifestyle the city can offer them.”

With the city’s long summers and snowy winters, Edmonton residents face the constant chore of outdoor home maintenance. In the same way Uber and Lyft democratized ride hailing, South East Edmonton-based startup Yardly is bringing online on-demand lawn care and snow removal to local residents. According to the company, “gone are the days of on-site quoting, haggling on price, leaving cash under the doormat and inconsistent service quality. Instead, with an instant free quote, simple online ordering, and reliable services backed by a satisfaction guarantee, Yardly is reinventing the outdated snow removal and lawn care industry.”

“We’re basically modelling us as the Uber for snow removal,” said Sheldon Zhang, co-founder of Yardly. “Traditionally, the service works as a five-month or one-season contract thing, where you don’t have much flexibility or control over what you’re getting,” said Zhang. “We only want customers to use it and pay for it when they need it.”