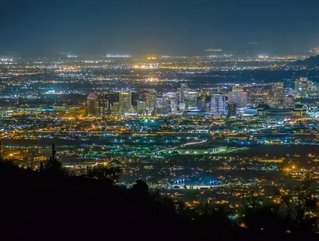 Welcome to Phoenix, Arizona, a hub of industry, culture and innovation, and the best place in the world to see what a future filled with self-driving cars might look like.

Known to its 1.6mn residents as the ‘Valley of the Sun,’ Phoenix, Arizona is the fifth most populous city in the US and the only state capital that is home to more than a million people. First settled in 1867, it was incorporated as a city in 1881 and became the capital of the Arizona Territory in 1889. Phoenix was originally an agricultural community, with an economy that remained centered around cotton, cattle, citrus, copper and its desert climate for decades before the arrival of tech companies in the wake of the Second World War.

Today, the Phoenix Metropolitan Area has a GDP in excess of US$243bn, and a per capita GDP of approximately $44,500, although its 4.2% unemployment rate is higher than the national average of 3.9%. Despite this, however, its economy was the third-fastest growing in the nation last year, powered by healthy performance in financial and business services, healthcare and manufacturing sectors.

The largest company to call Phoenix home is national pet goods and supplies retailer PetSmart, which chalked up more than $5.3bn in revenue last year. Its largest private sector employer is Walmart, which has more than 30,000 workers across the state, many of whom work at the company’s supercenters, discount stores, neighborhood markets, Sam’s Clubs and distribution centers in Phoenix itself.

While coastal cities like New York, Boston, Los Angeles and San Francisco have more prominent reputations for startup economies and being proving grounds for industry-disrupting innovations like food delivery rovers, Postmates and Uber, Phoenix has for the last year been home to the first steps of an even more important journey. Exactly one year ago, in December 2018, Google spinoff company Waymo launched a limited trial service of its self-driving taxi service in the city.

How we got here

In 2004, the US Department of Defense (DoD) hosted a competition. It took the form of a 142-mile-long obstacle course, designed to test the abilities of autonomous vehicles. Only one of the vehicles that entered made it more than seven miles. Undeterred, the DoD repeated the competition the following year. Five teams completed the grueling course in 2005, with the entry from the Stanford Engineering Department doing it in the shortest amount of time and winning a $2mn prize. That team was led by computer scientist Sebastian Thrun.

Two years later, Thrun was hired by Google to head up its fledgling driverless car program, Google X, which has since spun off into Alphabet subsidiary Waymo. Thrun left Google in 2014 to pursue executive roles at his own education and electronic aviation companies, but Waymo is now among the leading companies bringing autonomous vehicles to the point of commercial viability. The company says that it has tested its vehicles in over 25 cities across six states, but the largest concentration of miles driven have been in the suburbs of Phoenix.

Operational for a year now, the Waymo One service operates in four neighborhoods across the city: Chandler, Tempe, Mesa and Gilbert. A vetted group of around 1,000 local residents can use the company’s app to hail a ride from its growing fleet of autonomous vehicles, as well as give direct feedback on the service.

“It’s pretty trippy when you see the fact that the car is driving itself,” said Waymo One rider Nicole Collins in an interview with CNBC. “It’s great to be a part of history, for my kids to experience - my daughter actually liked it a lot.”

Riders with access to the Waymo One app can summon one of its 600 vehicles 24/7 and use them to travel anywhere in the limited area that the company’s fleet has mapped. The operational area is restricted because Waymo’s fleet is only autonomous in these pre-mapped areas, and the safety of its vehicles is largely dependent on the extensive pre-existing knowledge they have of an area’s roads and obstacles. In October, Waymo announced that its vehicles had begun the process of mapping out some streets in Los Angeles, as part of the process of determining whether the service is ready to take on one of the most congested urban transport environments in the country.

Waymo has also partnered with ride-hailing company Lyft, making 10 of its Phoenix vehicles publicly available through its platform. Also, in October, Waymo sent an email to its Waymo One customers, informing them of plans to remove the safety drivers that have so far been a necessary presence in all unmanned vehicles, ready to take the wheel in case of a malfunction or error.

As today’s cities become the smart urban environments of the future, places like Phoenix are offering remarkable insight into the solutions that may define the technological utopias of tomorrow.