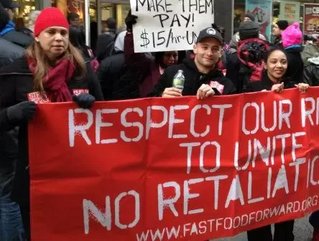 Employees from America’s popular fast food chains - McDonald’s, Burger King and Wendy’s - across New York walked out on Monday in a one-day strike demanding higher wages and the right to unionize. Their hope is for minimum wage to double from $7.25 to $15 an hour and put an end to what activist called, “abusive labor practices.”

“It’s noisy, it’s really hot, fast, they rush you. Sometimes you don’t even get breaks. All for $7.25? It’s crazy,” said Nathalia Sepulveda, who works at a McDonald’s opposite Yankee Stadium in the Bronx, where one protest took place.

Outside of the McDonald’s and Wendy’s in lower Manhattan, employees repeated the mantra, “we can’t survive on $7.25,” and witty retort, “Supersize our wages.” At the Wendy’s locations, the mob shouted at customers to avoid the restaurant and two police officers were stationed inside.

There were hundreds of people who participated in locations throughout New York. Similar strikes are planned across the nation this week, organized by the national Fast Food Forward Campaign, which launched last year as an attempt to tackle low wages.

“The workers’ actions will lift up all of New York City,” says campaign director Jonathon Westin “If they have more money in their pockets, they’ll spend it right here, helping to boost the entire economy.”

Doubling minimum wage would have a “significant effect on the private sector’s ability to create jobs, especially those typically filled by first-time workers and teens,” said Scott DeFife of the National Restaurant Association.

Glenda Soto, 35, a single mother supporting four children said that though she works full-time and often puts in 13-hour days at the Bronx McDonald’s, money is a constant headache. “My rent is going up in September,” she said. “We are already living paycheck to paycheck.”