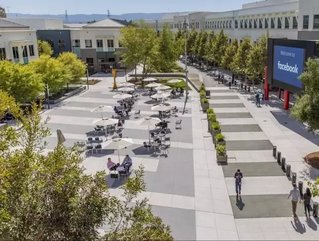 Bringing people together is at the core of Facebook’s vision – but now it has revealed plans to build a new community using bricks and mortar.

The social network wants to vastly improve the infrastructure near to its Menlo Park global headquarters, an ambition driven by the worsening housing crisis in the region.

It intends to build 1,500 apartments – 15% of which will be offered at below the market rental rate – for those at the company, where 9,000 people are employed, and other workers in the area.

‘Willow Campus’ will also include 125,000 square feet of retail space that will include a grocery store, a pharmacy and other community-facing outlets.

“The region’s failure to continue to invest in our transportation infrastructure alongside growth has led to congestion and delay,” said John Tenanes, VP Global Facilities and Real Estate.

“Willow Campus will be an opportunity to catalyze regional transit investment by providing planned density sufficient to support new east-west connections and a future transit center. We’re investing tens of millions of dollars to improve US101.

“Construction will generate an array of jobs, and we’re planning to help local workers access those opportunities.

“The site will be developed in two phases designed to bring office, housing and retail online in tandem. Our hope is to create a physical space that supports our community and builds on our existing programs.”

The plans, which have been developed with OMA New York, were submitted this month.

In December, Facebook announced a Catalyst Housing Fund of $18.5m ‘to pursue innovative and scalable ways to increase the production and protection of affordable housing’ near to its headquarters.

Google revealed last month that it is to build apartments for workers near to its Mountain View headquarters, investing $30m.