Magic Johnson Reigns On and Off the Court 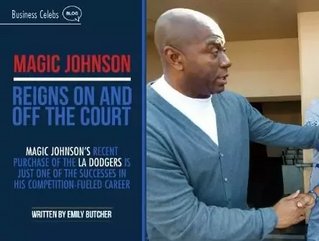 Click here to read this article on our interactive reader in the June issue of Business Review USA!

Magic Johnson—the top paid NBA player in the early ‘80s—has made sports headlines for years, but with his recent acquisition of Major League Baseball’s LA Dodgers, his name is on everyone’s lips again.

Leading the Guggenheim Baseball group, Johnson helped clinch a deal at the end of March, halting a much-anticipated auction for the team when he offered a staggering $2.15 billion. Beating out some of the wealthiest businessmen in the U.S., the deal is the highest bid in sports history, nearly doubling the previous record garnered for a franchise.

“I wanted to do two things when I was growing up,” Johnson has said. “I wanted to play in the NBA, and I wanted to be a businessman after my basketball career was over, and that is what I am doing now.”

The 52-year-old was seen as a good “local face” to act as a spokesman owner of the team his huge, 100 percent cash offer, probably didn’t hurt the deal, either.

Originally aspiring to be a television commentator, Johnson studied communications at Michigan State University. The 6’9” point guard quickly became an American favorite, ultimately winning three NBA MVP Awards, playing in nine NBA Finals games and snatching up a gold medal as a member of the U.S. basketball “Dream Team” at the 1992 Olympics.

Achieving a status likened to untouchable, Johnson’s fall from grace shook the world of professional sports in 1991 when he announced he had contracted HIV, resulting in his retirement for a short period. Dodging accusations of homosexuality when little was understood about the disease, the period marked a dark time for the basketball star.

Still, he came back not once, but twice out of retirement, ending his reign on a final high note in 1996, the same year he was honored as one of the 50 Greatest Players in NBA History.

Johnson’s determination and drive to succeed have undoubtedly played a substantial role in his ability to keep the disease at bay. Since his retirement, a healthy Johnson has become an active advocate for safe sex and promoting awareness of HIV and AIDS.

Applying his energy and relentlessly competitive nature towards business opportunities, Johnson was part owner of the Lakers for several years and has seen successful business ventures flourish, including restaurants, health clubs and forays into commercial real estate.

This strong financial base and interest in giving back to urban communities prompted Johnson to establish a charitable non-profit organization aimed at educating and helping troubled youth. For over 20 years, the Magic Johnson Foundation has promoted awareness of social and educational issues, as well as provided support for children’s health and mental well-being.

On and off the court, Johnson’s thirst for competition has helped him excel in his passions.

"If you're a competitive person, that stays with you,” Johnson has said. “You don't stop. You always look over your shoulder."