15 Marketing and Technology Trends For 2015 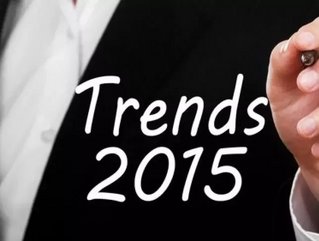 As the year comes to an end most of us start thinking of what the new year has in store for our personal and professional life. Based on existing information, 2015 looks likely to be a big year for tech breakthroughs, particularly in the business world.

You May Also Enjoy:

By the end of the year most adults have spent 3-4 years of our lives on some sort of handheld smart device. Apps make a business accessible and technically sustainable. In 2015, if companies don’t concentrate on their apps they will miss out on all the opportunities apps provide in the mobile world.

According to Forbes, “87% of connected devices sales by 2017 will be tablets and smartphones.” Due to the widespread use of smartphones and tablets, it’s necessary for companies to create an alternate mobile version of their website or utilize responsive web design.

In early 2014, both Facebook and Twitter beta tested their “Buy” buttons, which appear alongside certain tweets or posts.  This enables users to make purchases without leaving the network. 2015 consumers and social media users are expected to see a deeper integration of e-commerce and social media.

Social video is a great way of getting your message in front of your audience. Audio-visual storytelling is an emotionally compelling tool for businesses. YouTube is a platform with over one billion unique monthly visitors. Canadians rank third in the world for the use of YouTube, spending an average of 17.59 minutes per day on this site. With a wide demographic of 18-54, YouTube is an essential marketing tool for businesses in 2015.

According to one industry report, marketers who invest 40 or more hours per week in social media are much more focused on Instagram than in the past and plan to increase their use of the platform by as much as 49 percent in 2015.

Social Listening More Important Than Ever:

Real-time marketing will be expected from customer service oriented companies. In this type of marketing, companies need to determine an appropriate or optimal approach to a particular customer at a particular time and place.

More Personalized Approach to Targeting and Engaging With Consumers:

The world is more connected because of technology, however, marketing is becoming more regionalized, more localized and even more individualized, as consumers resist monotony.

Social Sharing Will Continue to Be an Important SEO Technique:

Social sharing will become more important than ever, as it will help your SEO rankings. Please note that according to Matt Cutts, the head of webspam team at Goggle, social signals are not causing ranking changes. The number of a company’s followers on Twitter or the number of Likes on Facebook has no affect on an institution’s ranking. However, social sharing can indirectly influence search ranking and directly increases the visibility of a page.

Automatic Network for Internet of Things:

With a projected 20 billion devices connected by 2018, Cisco predicts that consumers who rely on smart gadgets will look to brands to enhance connectivity and improve user experiences. Central identity between devices will take the Internet of Things to a whole new level, enabling them to communicate with one another and create a personalized lifestyle for consumers.

2014 has been a fast-paced year for 3D printing, with more capital, more companies, and more big ideas than ever. Entrepreneurs are creating new ways to print, scan, create, and share 3D content. According to Garner analyst, the 3-D expansion in 2015 will be biggest in industrial, biomedical, and consumer applications helping companies reduce costs.

Software-Defined Storage (SDS) enables the creation, deletion, and management of data storage within private or public cloud infrastructure. The on-going expansion in businesses’ data storage requirements has made SDS a necessity.

After the high-level of cyber security breaches in 2014, consumers of 2015 will be more cautious in sharing any of their personal date.  Technologies such as Touch ID, which links your fingerprint to your ability to access payments, will become a more popular means of payment.

According to The Financial Times, Facebook is developing a new service to rival Microsoft, Google, Salesforce and LinkedIn to make the workday more efficient. To further socialize the workplace, Facebook Work will allow coworkers to use email, instant messaging, social media, and cloud storage in one platform for collaborating with co-workers.

In 2015, companies will spend 46% more on their security technologies according to a report by Computerworld. High profile security breaches, in addition to the increase in mobile technologies, have promoted security spending to the top of the IT priority list for 2015.

While the brand will never return to its 2009 status, we can expect to see a significant financial turnaround and maybe even profitability in 2015. Many users favored the mobile security that BlackBerry has long offered, something that may grow more attractive in the wake of several recent high-profile corporate hacks. BlackBerry is expected to double its software revenue, which currently stands at around $250 million annually, in the coming year.

2015 is expected to be a year of innovation. The future of marketing and technology has never been brighter. The upcoming changes and innovations of 2015 will have a major impact on the way of marketing and the ways we do our jobs, communicate and consume.