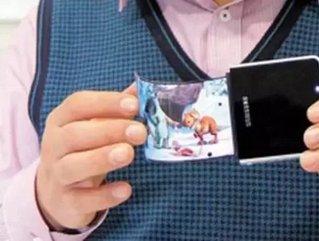 The Consumer Electronics Show (CES) in Las Vegas has quickly become the place of choice for smartphone manufacturers to debut their latest product innovations.

Annually, industry insiders and consumer electronic enthusiasts descend on Sin City as a rite of passage, debuting the next generation of smartphones to soon hit the market. The 2011 CES saw HTC and Motorola emerged as show favorites, but LG and Samsunggenerated some out-of-this-world buzz.

For those not fortunate enough to attend the smartphone coming out party in the desert, here are the top 10 smartphones from the 2011 CES.

Okay, technically this isn’t a smartphone, but it’s far too cool to leave of the list and will surely kick off this 10 best smartphone countdown with a bang. Samsung showed off a new 4.5" WVGA (800x480) flexible AMOLED display. The bendable screen can be twisted and contorted while retaining its high resolution.

An encore to last year’s model, the HTC Evo Shift 4G has a sliding Qwerty keyboard and the latest version of the highly acclaimed HTC Sense user experience. This smartphone boasts 4G, Android 2.2, a 5MP camera/HD camcorder and a 3.6-inch capacitive touch screen display. Despite minor alterations, this year’s is boringly similar to last year’s version.

LG claims that the Optimus Black 4-inch "NOVA" display boasts the brightest and sharpest image on the market. On top of that, attendees marveled at how thin the smartphone, measuring 3.8 inches long by 2.51 inches wide by less than half an inch thick. Optimus Black ships with the Android 2.2 OS, now the second most smartphone OS.

Leading the way in smartphone image quality, the Samsung Infuse 4G will be the thinnest Android device and feature the largest screen at 4.5 inches in AT&T’s smartphone lineup. With Samsung’s next-generation Super Amoled Plus technology, the Infuse 4G features 50% more sub-pixels for better contrast and outdoor readability.

One of the few Sony products not 3D capable, the Sony Ericsson Xperia Arc is, however, one of the few 2011 smartphones that will ship with Android 2.3 OS. This smartphone is also characterized by a slim 8.7mm body and a 4.2-inch display for crisp, clear images. For bloggers, the Sony Ericsson Xperia Arc left an impression, in part to its quickness. It is the first smartphone to utilize the Mobile Bravia Engine.

Announced for Verizon's 4G LTE network, the LG Revolution was a CES 2011 People’s Choice Award nominee. We’re not sure if it received accolades for the built-in Netflix app or the spacious 4.3-inch display, but either way, LG apparently gave the people what they wanted.

Quite possibly the fastest smartphone and definitely the most hyped headed into CES, the HTC Thunderbolt lived up to expectations. With a midyear release date, HTC Thunderbolt is perfect for multimedia and YouTube fans with its lightning fast loading speeds.

2. Motorola Droid Bionic Another Verizon 4G poster child and CES 2011 People’s Choice Award nominee, the Motorola Droid Bionic deploys a dual-core processor for a total of 2GHz of power. With that power and Motorola's growing portfolio of business-ready smartphones, IT developers can build custom apps for business tasks. An official release should come in the second quarter.

Another 2011 People’s Choice Award nominee and winner of the 2011 CES Award for smartphones, the Motorola Atrix 4G essentially harnesses the power and performance of mobile computing. Users can connect the Motorola ATRIX to an HDMI compatible monitor, HD TV or Motorola’s Laptop Dockand surf the web with a full Mozilla Firefox browser and access all files, emails, photos and movies on a larger screen in the office. The Motorola Atrix 4G is easily the most versatile and functional smartphone slated to be released this year.