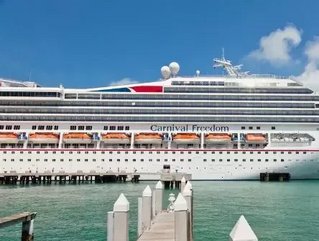 While cruise ships are a huge part of the tourism industry, the air emissions released from the massive ships as they drift through the oceans can lead to steady tension between the industry and proponents of environmental conservation. But sometimes those forces find ways to work together. In one such example, this week Carnival Corporation & plc struck a deal with the U.S. Environmental Protection Agency to move ahead with a plan to reduce its air emissions.

According to reports, the catalyst for this deal is a treaty recently ratified by the International Maritime Organization:

A treaty approved by the International Maritime Organization requires all oceangoing vessels to start using lower-sulfur fuel in 2015 whenever they are within 200 miles of Canada and the United States. The requirement is meant to reduce harmful sulfur and particulate pollution from shipping, a move EPA officials say will yield major air-quality improvements well inland and prevent thousands of premature deaths.

Rather than conform to using the cleaner burning fuel, Miami-based Carnival has instead pledged to invest $180 million in the installation of pollution control equipment on 32 coast-cruising vessels within the next three years. The equipment employs what Carnival calls advanced “scrubber technology” to remove sulfur, black carbon, and particulate matter from the ships’ exhaust gas. It is expected that the exhaust treated with this equipment will not only meet EPA standards but exceed them.

In a press release from Carnival, its Chief Executive Officer stated his enthusiasm about starting this work with the cooperation of the EPA:

“This is a significant accomplishment as well as an important milestone for our company,” said Carnival Corporation & plc CEO Arnold Donald. “Working together with the EPA, U.S. Coast Guard and Transport Canada, we have developed a breakthrough solution for cleaner air that will set a new course in environmental protection for years to come.”

Meanwhile, the EPA has also expressed satisfaction that it has been able to reach an understanding with Carnival:

Christopher Grundler, director of the EPA's office of transportation and air quality, said the agency is "very pleased that the cruise industry has stepped up to meet its obligations."