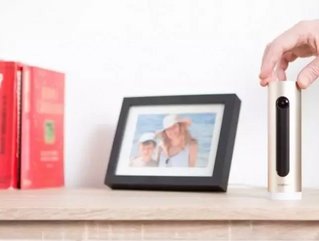 Read this article and more in the February edition of Business Review USA!

Everyone is talking about it—the Internet of Things; the IoT—but the sentiments can be mixed. Words like “cyber attack,” “privacy breaches” and “data sharing” flow through the natural excitement of a new product reveal, tarnishing it slightly if not severely.

Related: [Infographic] The Future of IoT

While data security is a valid and serious concern, this article will not be addressing it anymore than it already has—let another publication do that. The technology that exists today—and is still being invented as you read this—is science fiction-movie worthy and we are excited, thrilled, even giddy to be around to see it.

(Seriously, though: How many times can people complain about the Back to the Future inventions that we don’t have? Self-lacing shoes, anyone?!)

Bottom line: The devices, gadgets and “things” we see emerging through the advancement of the IoT are pretty damn cool. Here are five you really should have in your smart collection but be warned: Not all are available until later this year, so start working on your patience.

Never again wonder if your child made it home from school: Your house will tell you. Netatmo’s Welcome is a smart home camera equipped with facial recognition technology that is customizable and, well, smart.

Upon noticing Lily (we’ve named her for you) walk in the door, Welcome will send a notification to let you know. It’s not just any notification, though: It will say “Lily is home.” The camera knows her name.

The device will also send an alert should any unknown guests arrive. Apparently, the camera learns the faces of each family member over time.

Welcome has a 130-degree field of view and night vision with an infrared LED as well, although the Welcome Tags that will be released later this year can help if that isn’t enough visibility for you. Place them anywhere inside or around your home, and the smart sensors will notify you of any movement.

There’s also an embedded microphone if you want to really get creative.

Lenovo: VIBE Band VB10
One of the hottest wearables on the market, the Lenovo VIBE Band VB10 is also one of the smartest and most affordable ($89). Similar to other wearable wrist products, the device monitors fitness levels and activity, tracks goals, and acts as a mini personal trainer/coach.

Receive phone notifications including calls, social and texts, and keep track of your smartphone through a proximity reminder that sends a warning if it gets too far away. Don’t worry if you do not heed the initial warning though, because the VIBE Band VB10 also has a phone-finding feature.

The battery can last up to seven days, even if the Bluetooth and display functions remain turned on, and it has an E Ink display to eliminate glare. Did we mention it is also waterproof?

Sleep Number: SleepIQ Kids Bed
Yes, there is even a smart bed to help take care of your kids—and it may be the best babysitter on the planet. While parents can’t just toss their newborn under the covers and let the bed work its magic, they can work with the child (and, um, the bed…) to improve daily routines as well as sleep patterns.

How are Susie’s breathing patterns? How often does Billy stir at night? Let’s find out!

Each night, the SleepIQ Kids Bed will assess the child’s quality of sleep through a full-body algorithm, assigning a SleepIQ score that parents can view on a dashboard in real-time.  This smart bed will also alert parents if the child gets out of bed, and offers the added convenience of turning off forgotten lights in the kids’ room from the warmth of the parents’ bed.

There is no doubt that this smart device is one of the coolest stand-outs in the world of “Things,” but our favorite feature is geared more toward Lily, Billy and Susie:

This bed checks for monsters that may be hiding underneath.

Quirky: Spotter UNIQ
Multipurpose sensor Spotter UNIQ was released as part of a new line of smart home products that are connected, customizable and built-to-order—even down to the color (the décor must match in this smart home!) Up to four sensors or functionalities can be added to just one power source, allowing Spotter UNIQ to alert the owner—or even another smart home product— to handle the culprit.

While this alone is cool, the San Francisco-based microfactory in which Spotter UNIQ was created along with dozens of other connected products stands out as well. The first of its kind, the factory opened in December 2014 and develops built-to-order electronics for smart homes.

With 3D printers, automated circuit board assembly lines and more, we predict that Quirky will continue to produce cool “Things” in 2015.

Binatone Global: The Scout5000
Fido deserves something smart, too!

Not that we responsible pet owners would ever forfeit the chance to play with, walk or just be near the pooch, but this may come on handy one rainy day. With this smart collar, owners can see, hear and communicate with the pet from anywhere in the world.

Yes, you can be in Australia and still tell Fido to get off the couch in New York.

The built-in speaker and two-way audio are accompanied by HD footage that records a live stream from the Scout5000’s collar camera, so even if you miss a minute of the action, Fido is still being watched—and you can rewind.