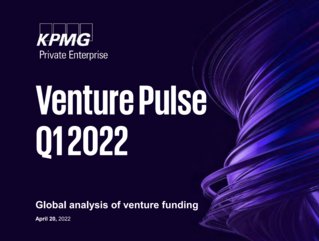 Venture capital activity in Canada has hit record levels in the first quarter of this year, according to KPMG’s latest quarterly Venture Pulse report.

This record activity in Canada bucks the overall VC investment trend, which has slowed globally following a record year in 2021 for exits, with the Americas and Asia both seeing declines in the first quarter, while Europe experienced only a modest increase.

The Russia-Ukraine war, rising inflation and interest rates, continued supply chain pressures and the persistence of the pandemic likely contributed to a slowdown in deal-making activity.

Despite the first three months of this year being marked by global uncertainty, Canada achieved record deal values, though there were fewer deals, with US$3.5bn in investment across 213 deals, up from US$3bn across 276 deals in the year-earlier quarter.

Canadian venture firms raised US$824.4m with the majority of that funding going towards a Toronto-based software firm, which raised US$650m in a Series C round.

And Canada was one of 11 countries worldwide to raise US$500m-plus funding rounds during the quarter thanks to the 1Password deal, which, at US$650m marked the world’s fourth largest deal this quarter.

While acknowledging that significant uncertainty during the quarter had impacted the total number of deals in Canada, KPMG Canada’s Partner Sunil Mistry said that the amount of money being invested in the Canadian market right now is “astronomical”.

And the VC market here is expected to remain stable over the next few quarters “as the mountain of dry powder gets deployed”, says Sunil, though there could be some slowing by the end of the year if geopolitical and pandemic-related uncertainties persist. 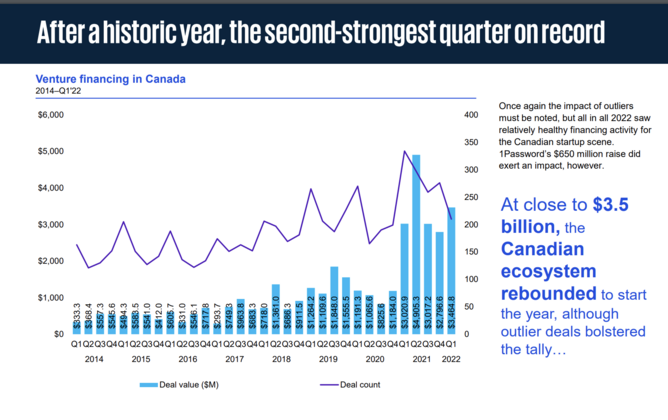 Similar to the global and US VC landscape, Canada continues to attract significant VC investment in the technology space, which accounted for 105 of the 213 deals achieved this quarter.

Also noted was a clear momentum building in cleantech, while VC investment in cybersecurity surged further this quarter led globally by a US$650m raise by Canada-based 1Password. Not surprising given that cyberattacks have grown significantly, and will continue to grow. Something that will likely keep VC investment in the space quite high for the foreseeable future.

Corporate VC and exits take a hit this quarter

Despite the uptick, corporate venture capital investment dropped significantly in the first quarter coming in at just US$966m, much lower than the previous three quarters, though still up from last year. There were 41 deals in Q1 2022, down from 68 deals this time last year.

Describing last year’s market where many companies went public as “frothy”, Sunil says that this frothiness has now dissipated as valuations have dropped, adding that a lot of the companies that went public last year simply aren’t living up to expectations.

“With inflation and interest rates going up, supply chain issues and geopolitical concerns could affect the IPO market,” concludes Sunil.