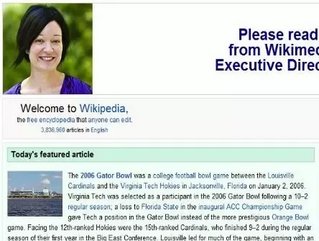 Those fundraising banners stamped across the pages of online encyclopedia Wikipedia have been replaced by a thank you note, as the site has hit its fundraising target and ensured that it will survive for yet another year.

Wikimedia Foundation, the non-profit host of the outside advertising-free Wikipedia, has raised a record-breaking $20 million from more than one million donors. The success of the campaign can be largely attributed to banner ads featuring messages from volunteers, pleading for donations from the site’s hundreds of millions of users.

“We’ve taken down our fundraising banners, because we’ve hit our target. Thanks to you,” said Wikimedia Executive Director Sue Gardner in a post. “Your support is how we pay our bills. People like you, giving five dollars, twenty dollars, a hundred dollars. Thank you for helping us.”

Over the 2011-2012 fiscal year, Wikimedia plans to spend $28.3 million. The remainder of the funds will come from grants from institutions and other year-round small donations.

“Wikimedia websites serve more than 470 million people every month,” Gardner said. “It is the only major website supported not by advertising, but by donations from readers. Our model is working fantastically well. Ordinary people use Wikipedia and they like it, so they chip in some cash so it will continue to thrive. That maintains our independence and lets us focus solely on providing a useful public service.”

Wikimedia told MSNBC that the money raised will go toward buying and installing “servers and other hardware, to develop new site functionality, expand mobile services, provide legal defense for the projects and support the large global community of Wikimedia volunteers.”