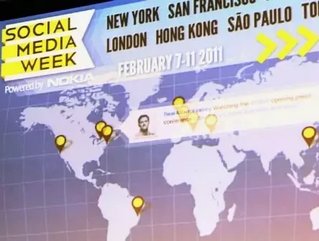 Although today marks the last day for Mercedes-Benz Fashion Week in NYC, those on the other coast are gearing up for Social Media Week in Los Angeles happening next week from September 19 to 23 all across the city. More than 75 events are slated during the week, including impressive keynote speeches and all things social media for the gaming, technology, business, community and education industries.

Social Media Week is a 13-city experience that has become the world’s largest simultaneous distributed conference of any kind. Los Angeles is just one of two US cities taking part in the week-long global effort, which will also include simultaneous week-long events in Beirut, Berlin, Chicago, Glasgow, Milan, Moscow, Rio de Janeiro, Sao Paolo and Vancouver.

Below is the schedule of events for Social Media Week LA:

Monday, September 19, the conference will kick off at the Paley Center in Beverly Hills at 8:15 am with a conference preview and continental breakfast hosted by conference organizers SocialRadius, followed by a keynote speech at 9:00 am by digital pioneer Robert Tercek who, among his many accomplishments, is best known as the person who put Oprah Winfrey on Twitter in 2009. His panel, “The Mobile Social Tsunami: Welcome to Life After Mass Media,” will set the groundwork for the five days of events throughout the city.

The all-day program at Paley Center also includes panels curated by Music Choice, the Public Relations Society of America (PRSA), and a panel on celebrities in social media featuring actor Kevin Pollak, former Lakers star Rick Fox, and top music industry attorney Ken Hertz. Monday’s festivities move slightly further west at 6:00 pm for the 500-person opening party at the V Lounge, 2020 Wilshire Blvd., Santa Monica.  In total, Monday features 13 events at six locations, the vast majority of which, including the opening party, are free and open to the public on a first-come basis.

Tuesday, the focus shifts to social media and advertising with two days of content at Ogilvy, Culver City, and to social gaming, with a Gaming Power Panel moderated by serial entrepreneur and father of virtual currency, Brock Pierce, with a panel of gaming companies including Xfire, GamersFirst and Gamezee, followed by a Silicon Beach Meet-up and Reception. The panels at Ogilvy include sessions on Social Engagement Advertising, hosted by SocialVibe, QR Codes and Automotive and Social. Ogilvy is also hosting a panel called “Mobile Goes Social at the Primetime Emmys” that features a behind-the-scenes look at the role mobile and social technologies have played at this Sunday’s upcoming Emmys. Additionally, 18 sessions will be scattered across 13 venues for the rest of the day.

Wednesday, in addition to the second day of advertising panels at Ogilvy, will feature another half-day of content at the Paley Center, from 9:00 am - noon, featuring a two-hour breakfast panel by Experian titled “When Integrated Marketing Met Social: Love at First Like.” The morning session concludes with a panel on Facebook marketing by leading Facebook statistics portal and social media marketing platform, Socialbakers. The afternoon will also feature a social entertainment panel at Ogilvy with BuzzFeed and Funny or Die, as well as a fashion event at Rockwell. Capping off the evening will be parties by Digital LA at the V Lounge on Social Media and Social Good, as well as an iHollywood Forum panel and mixer at Bedford Parc in Baldwin Hills.

Thursday kicks off with a Social Media Breakfast at the Coupa Café in Beverly Hills and then the focus turns to the Bergamot Station hub in Santa Monica, where four panels tackle social media and social good. The evening’s events include the Schmoozd Tech and Startup Job Fair at Wokcano in Santa Monica, and a Tubefilter Meetup at theStream.tv Hollywood Studios.

Friday, the focus moves back to the Paley Center, where social media author Eric Schwartzman will present a keynote and panel on social media for small business, followed by “We First” author Simon Mainwaring and other thought leaders to be announced on a panel called “Brands in Action: The New Social Media Promise.” The week wraps up with a VIP closing party on the rooftop of the Paley Center on Friday night.

Most of the 75 events and parties are free and available on a first-come/first-serve basis.  For those who would like to skip ahead of the lines, the conference is offering a “Fast Check-in” pass for $49 that will allow access into any free, non-VIP event (60+ in all) without signing up dozens of times.

In addition, there will be two levels of VIP passes available.  For $149, attendees will receive a Fast Check-in pass, plus will be allowed guaranteed entry into a special VIP lounge at four of the parties (Opening Party, Media Hub Reception, Gaming Power Panel, and Social Media for Social Good).  A small number of VIP-Plus passes will also be available for $225 and additionally include entry to the VIP Closing Party.