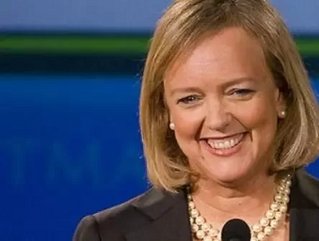 Meg Whitman is just hours into her new reign as CEO of Hewlett-Packard (formerly held by Leo Apotheker) and there is already mixed reviews of her new position from fellow American CEOs. Whitman is in the spotlight now as HP investors are in desperate need for an executive to reorganize and refocus the company to get it back on the up and up. And more importantly, investors want a CEO to pull back HP’s plans to spin its PC business.

HP stock prices already dipped below and others in the CEO limelight don’t believe Whitman is the best person for the position. (HP shares are down 95 cents this morning and stock traded as low as $19.92, making for a new 52-week low.)

According to Forbes.com, here are a few reactions to Whitman’s new job and how they foresee the future of the company.

Bill Shope, Goldman Sachs: “HP’s new CEO clearly has many issues to address in coming months, and we are cautiously optimistic many of the strategic challenges are resolvable,” he writes. “Unfortunately, the company is also facing increasing cyclical and secular tailwinds. Indeed, on the conference call last night, HP’s CFO noted that current quarter revenues could fall short of guidance as a result of softness in Europe and the public sector. We fear that these cyclical pressures could intensify in coming months as macroeconomic pressures continue to weigh on IT spending.”

Toni Sacconaghi, Bernstein Research: “While we believe the decision to replace Leo Apotheker was a good one, we are disappointed with the naming of Meg Whitman as HP’s permanent CEO, and believe that this sentiment is shared by most investors and large HP shareholders,” he writes. “We view the lack of a comprehensive search of internal and external candidates for a permanent CEO role as unsatisfactory and unnecessarily hasty…HP could have – and should have – looked to attract a highly talented executive with a strong track record in operations and capital deployment from a large multinational company, likely outside the tech industry.”

Kulbinder Garcha, Credit Suisse: “While investors are likely to welcome any change, we believe several issues remain. These include deteriorating fundamentals, continuing Board indecisiveness and the need for evidence of improved execution.”

Jayson Maynard, Wells Fargo: “While Whitman has an impressive resume and is an improvement, in our view, she doesn’t have enterprise computing or hardware experience.”

Scott Craig, Bank of America/Merrill Lynch: “In our view investors will likely remain wary, given Whitman’s limited experience in ‘enterprise convergence’ and running a company like HP, as well as the Board’s actions over the past 12+ months.”