Are your business meetings a waste of time? 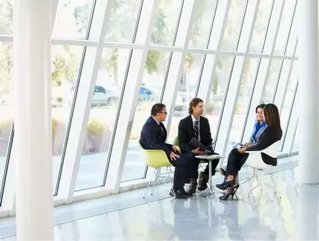 In survey after survey, meetings get knocked by everyone from employees to senior executives as being among the biggest waste of work hours.

In one poll, by Office Team, 45 percent of senior executives said their firms would be more productive if they banned all meetings at least one day a week.

“The problem that often occurs – beyond the obvious, like lacking a clear agenda – is the underlying current of competition that each person brings to the table,” says Berny Dohrmann, Chairman and Founder of CEO Space International, and author of “Redemption: The Cooperation Revolution,” (www.ceospaceinternational.com).

“Competition pulls people apart; cooperation brings them together. Signs that competition is causing unproductive meetings include one or two people dominating the floor; individuals touting their achievements; people consistently failing to contribute their ideas because they fear being criticized or ridiculed.”

The drive to compete is so ingrained in most of us, we often don’t recognize it, Dohrmann says.

“We get it culturally. We learn it in school. It’s often reinforced within our own families as we’re growing up. We have to be aware of that and identify the culture we want, then set about creating it – beginning with our meetings.”

Cooperative meetings yield far better results, he says. People working together toward a goal are more efficient, more productive, and even happier. The group pulling together toward the same goal will achieve that goal far more quickly than individuals each pulling in opposite directions, Dohrmann says.

How can you turn competition into cooperation – and wasted meetings into fruitful gatherings? He offers these suggestions:

When someone makes a suggestion that can help another individual or department, publicly acknowledge and praise that teamwork. Encourage inter-departmental interest, empathy and even personal bonds by allowing employees from one area to shadow employees from another. Remind everyone that when one department succeeds, everyone succeeds. Look for managers and employees who tend to be naturally cooperative and enlist them as mentors and leaders to encourage and spread the new culture.

Avoid discouraging the behavior with tactics that rely on public criticism, scorn or ridicule. Rather, set egalitarian standards, such as time limits for each person to speak, and stick to them. When someone strays off topic, discern whether he or she is sharing a potentially valuable idea or seeking a personal competitive advantage (i.e. by laying blame, self-promoting, etc.) before steering him back on topic.

Participation is essential to cooperation

Require everyone to participate in meetings. Circulate the agenda in advance with the stated expectation that each attendee will come to the table prepared to address at least one item – even if it’s not an item within their area of responsibility. Participation is a key component of a cooperative work group and making it the norm is often as simple as getting everyone into the habit.

Berny Dohrmann is chairman and founder of CEO Space International, one of the largest support organizations for business owners. As the inventor of Super Teaching, a Title I technology that accelerates retention for public schools, he is a frequently a guest speaker to various nations, VIP conferences and television programs. As a member of the Dohrmann family, which operated the largest global resort-outfitting firm as Dohrmann Hotel Supply for several generations, he grew up with several business mentors, including Napoleon Hill, Earl Nightingale, Walt Disney, Warner Earnhardt, Bucky Fuller, Dr. Edward Deming and Jack Kennedy. He has learned from both success and adversity: Indicted for criminal contempt for a $86,000 junk bund from an investment banking firm he had sold, he fought the charge in court, but lost in 1995 and went to prison for 18 months. He has since made a documentary about the experience.