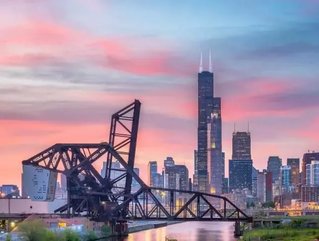 Located on the southern shore of Lake Michigan, Chicago, Illinois, is the third-largest city in the United States with a population of over 2.7mn. The city has a long and proud tradition of manufacturing dating back to the 1820s, when large reserves of lead were discovered on the banks of the Mississippi, 160 miles west of Chicago. A decade later, Illinois resident John Deere invented a steel plow that, by the 1870s, saw his company grow into one of the largest manufacturers of agricultural equipment in the world. Today, Deere & Company manufactures and distributes equipment and machinery used in agriculture, construction, forestry, and turf care. Still headquartered in Illinois, the company reports annual revenue of over US$30bn, according to Forbes Magazine.

However, the manufacturing highs experienced by America’s ‘second city’ are matched by its precipitous lows.

While manufacturing remained a large part of Chicago’s economy throughout the first half of the 20th century, with an estimated 1,400 companies working to create military goods during the Second World War, the city’s municipal architecture and rising labour costs lead to a reduction in the scale of its industrial dealings throughout the post-war decades. According to the Encyclopaedia Britannica, “estimates of industrial jobs lost during the first four post-war decades run as high as one million”.

According to an Economist report, large foreign manufacturing companies like Foxconn and Electrolux are reducing their manufacturing commitments across the United States, citing higher tariffs and higher wages. At the same time, “Caterpillar, a legendary American maker of heavy equipment, reported disappointing profits for the fourth quarter thanks in part to a slowdown in China’s economy, which has been hit by America’s trade war”.

While the economy’s biggest manufacturers experience setbacks, however, a new breed of modern manufacturer is stepping up to the plate, and there are signs that the bigger companies are more agile than expected. The Economist report notes that “manufacturing is undergoing a revival, especially among agile smaller firms and those using advanced techniques”. The number of manufacturing jobs in the United States rose by 468,000 in the past two years.

Having entered fourteen mayoral elections in the city’s history, the Daley family is close to being Chicago royalty. Bill Daley, who served as President Obama’s Chief of Staff and as President Clinton’s Secretary of Commerce, announced his mayoral candidacy in September 2018. Manufacturing has always been a keen focus for Daley, who argues it is “time for Chicago to return to its industrial roots”.

Crain’s Chicago Business reports that, in a speech in January, Daley proposed that the city devote itself to attracting 100,000 manufacturing jobs over the next 10 years. He suggested that the city also offer $1bn in incentives to persuade manufacturers to return from overseas and the American Sun Belt. North Branch Works Executive Director, Mike Holzer, commented: "It targets the big needs . . . and makes a point of capturing home-grown research and development efforts and turning them into businesses and jobs".

In January 2019, Mayor Rahm Emanuel presided over the opening of a new $45mn manufacturing and engineering center, a 57,000 sq. ft facility at the Richard J. Daley College in the heart of Chicago. According to the Chicago Sun Times, “the Manufacturing Technology and Engineering Center is the largest and most advanced facility at any of the City Colleges’ campuses.” The center will serve students looking to attain certification, associate degrees, or accumulate credits in preparation to transfer to a four-year college to pursue careers in manufacturing and engineering technology.

Mayor Emanuel addressed the students attending the opening: “You’re our children, your future is our future, and we are going to invest in that future”.

Companies like Tumpf, a German machine tool manufacturer creating highly specialized products, have experienced dramatic success in New England and Chicago thanks to high-tech smart factories designed for versatility, customization and short production runs. Trumpf, which counts John Deere among its customers, experienced a 21% increase in sales over the mid-2017/18 financial year.

Trumpf’s smart factory functions as a factory and a showroom, demonstrating the possibility of the highly customizable, cutting edge manufacturing infrastructure to its Illinois clients. Currently, the factory is configured to make specialist goods related to the production of sheet metal, a significant aspect of Chicago’s manufacturing economy: 40% of the United States’ sheet metal is made in and around Illinois.

While Chicago never saw the automotive manufacturing glory of Detroit, it has one of the country’s oldest relationships with the auto industry. Originally used to produce the revolutionary Model-T, Ford Motor Company has operated a factory in Chicago since 1924, according to Bloomberg. Until recently, the factory was used to produce Ford’s sedans - models which have seen poor sales in the last few years, casting doubts over the security of the factory’s workforce.

However, in February 2019, Bloomberg reported Ford’s announcement that the automaker will invest $1bn in two of its Chicago factories and hire a further 500 workers, as the company pivots production away from its sedan line and towards more profitable sport-utility vehicles. “We’re playing to our strengths,” Kumar Galhotra, head of Ford’s North American operations, told reporters in January. “That means we’re allocating our capital differently. 90% of our capital is now going into trucks and utilities.”

The added investment will bring the total number of Ford employees in Chicago to 5,800. The almost-century-old factory will be given a complete, high-tech refit, including updated lighting systems, security and a new body and paint shop.

This combination of investment from large manufacturers, educational institutions, politicians and small, agile firms means that, whatever shape or size it may be, Chicago is working to manufacture a bright future for itself.