Coke Changes Classic Can to White for Polar Bear Awareness 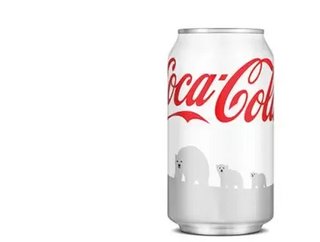 The Coca-Cola Company announced today that white will be the new red when it comes to its iconic coke can. Coca-Cola’s new can features the classic Coca-Cola logo in red, on white background with a mother polar bear and two cubs gracing the front. Partnering with the World Wildlife Fund (WWF), Coca-Cola’s new campaign is debuting to raise awareness and help protect the polar bear’s Arctic home. The Coca-Cola Company is, additionally, donating $3 million to the WWF’s polar bear conservation efforts.

"We want to help the polar bear -- a beloved Coca-Cola icon since 1922 -- by helping conserve its Arctic habitat," said Muhtar Kent, Chairman and CEO of The Coca-Cola Company. "That's why we're using one of our greatest assets -- our flagship brand, Coca-Cola -- to raise awareness for this important cause. And by partnering with WWF, we can truly make a positive difference for these majestic animals."

Coca-Cola has never before changed the color of their iconic can to support a cause. 1.4 billion Coke cans will feature the new white façade this holiday season. The Coca-Cola Company additionally plans to  add white bottle caps to all of its bottles of Coke, Diet Coke, Coke Zero, Sprite, Nestea, Minute Maid and more.

The new cans will roll out beginning on November 1st, 2011 and packaging will last through February 2012. The initial donation from Coca-Cola to the WWF will be $2 million while the company is asking fans to donate as well through text or by donating online at ArcticHome.com. The Coca-Cola Company will match all donations made with a package code through March 15th 2012 with the a match limit of $1 million.

The donation is specifically committed toward the WWF’s conservation efforts in the Arctic, for their survival today and onward. "Polar bears inspire the imagination. They're massive, powerful, beautiful and they live nowhere else except the Arctic. Their lives are intimately bound up with sea ice, which is now melting at an alarming rate," said Carter Roberts, President and CEO of World Wildlife Fund. "By working with Coca-Cola, we can raise the profile of polar bears and what they're facing, and most importantly, engage people to work with us, to help protect their home."

Additionally, as part of this campaign Coca-Cola plans to produce “Arctic Home” television commercials to raise awareness through the use of footage from the upcoming IMAX film To the Arctic 3D.

It’s clear Coca-Cola’s campaign is a bit different from its usual holiday branding.  The question is: is this a ploy from the in-house marketing team to make their usual winter advertising campaign become more credible in the minds of consumers? Since Coca-Cola, practically the leading soda manufacturer in the world, is only seriously committing $2 million while asking its fans to help commit the rest, one wonders why the company didn’t want to add more funds to the pot. Either way, rebranding its iconic can for the holidays will definitely turn some heads and instead of just selling Coke, the campaign will hopefully save some polar bears too.