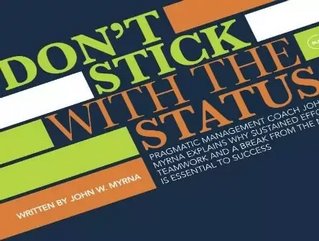 Click here to read this article in the March issue of Business Review USA!

“It can’t be done,” proclaimed the director of operations at a client company.

We were discussing how our client could increase capacity in anticipation of a projected surge in demand in the next year.

“Employees will never accept a fourth shift,” he said. “They won’t be willing to change their schedules. I asked them and they told me so.”

What this executive failed to recognize is that strategic goals (like increasing capacity to meet demand) are strategic precisely because they change the status quo.

Why is it so hard in practice to actually implement truly strategic goals?

Any time you try to change things in your company, there’s a risk involved and a potential for loss. Loss carries two to five times as much impact as a gain. When there is fear of the unknown, people have a tendency to hunker down and hold their ground. That’s one reason why changing the status quo can’t be accomplished with the heroic effort of just one person. It takes the sustained effort of the whole team.

Hawaiians use the term “crab-pot mentality.” When Hawaiian fishermen go crabbing, they simply throw the crabs they catch into a bucket, with no worries about the crabs escaping. That’s because the Hawaiians learned long ago that there was no danger of that. Whenever one crab reaches the lip of the bucket and starts to crawl out, the other crabs grab it, seeking their own escape, and pull the lead crab back into the pot.

You’ve likely seen examples of this in your own company. One person gets a bright idea for making things better, and right away everyone else chimes in with reasons it will never work. And there everyone stays…hopelessly stuck in the status quo like crabs in a bucket. Think how much more effectively the crabs could change their status quo by allowing one crab to make it over the top and pull the rest of his cheering team with him.

In the end, the executive team at our client company identified the many concerns about implementing a fourth shift. The action plan for implementation fully engaged the employees who would be affected by the change. The company dealt honestly with employees’ real and perceived negatives. Once the changes in operating schedules were made, employees fell in love with the new status quo. (Heaven help the company if they were to suggest returning to the old schedule!)

Remember that changing the status quo doesn’t generally happen with the isolated effort of one heroic individual or department. It usually requires sustained effort across the entire company. The members of your company’s executive team must be on the same page, communicate their vision for the future, and be able to sustain implementation.

About the Author: John W. Myrna is a pragmatic management coach and co-founder of Myrna Associates, specializing in helping companies with $2 million to $100 million in revenue create targeted and actionable strategic plans. With extensive experience in C-level and senior management positions before starting his own firm in 1991, John is an expert on the development and application of strategic planning. John is a frequent speaker and an author. Reach him at [email protected] or www.myrna.com.