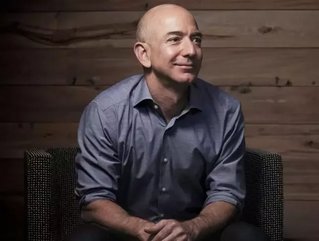 This week, Jeff Bezos briefly became the richest person in the world when his net worth exceeded that of Bill Gates for the first time – before it quickly fell back below the Microsoft founder as markets closed.

The Amazon CEO is expected to hold the mantle on a more permanent basis in the coming weeks, so here we chart his journey to the very top:

Jeff Bezos demonstrated an entrepreneurial spirit from an early age.

Born in Albuqueque, New Mexico, the teenage Bezos moved to Miami, Florida with his family and set up his first business, the Dream Institute – a summer camp for fourth, fifth and sixth graders - while at high school.

After graduating from Princeton University in 1986 with a degree in computer science and electrical engineering, he worked for a number of companies before becoming D.E. Shaw’s youngest VP in 1990.

Bezos gave up his promising career in the financial industry in 1994, however, to start on a path that would eventually lead to where Amazon is today, the biggest ecommerce company on the planet.

After originally working out his garage, Bezos expanded his Amazon operation to a test site before launching Amazon.com in 1995.

The website was an immediate success, selling across the States and in 45 other countries before going public in 1997, quickly becoming a leader in the online retail sector.

Through the years, Amazon added further strings to its bow, becoming a major retailer in its own right. By 2011, its revenues topped $17bn for a 12-month period. Now, it is as well known for its innovation and broadcastings as the items on its shelf.

Aside from Amazon, Bezos has invested in other areas: his Blue Origin project aims to develop commercial space travel and, in 2013, he paid $250m to buy the Washington Post from its long-running owners, the Graham family.

He has been criticised for his lack of philanthropical work in comparison to his peers, Gates and Mark Zuckerberg, but has still donated millions to charitable causes since soaring to the upper reaches of the rich list.