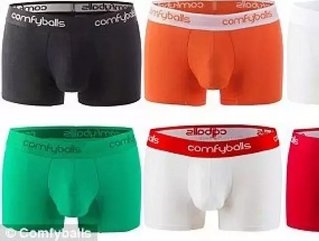 Norwegian apparel company Tonic Brands AS recently discovered the fine line between funny and offensive—yes, there is one— and in case you’re wondering, it resides in the microscopic gap between balls that are comfortable versus those that aren't. More specifically, it is apparently ok to compare ice cream to sweaty (or “Schweddy") testicles but not ok to reference a product created solely for testicular comfort.

To be clear, I am not referring to baseballs, footballs, basketballs, bouncy balls, gumballs or any other G-rated type of “ball” that comes to mind: For once, your adolescent sense of humor isn’t (entirely) inappropriate. I am, in fact, talking about testicles, a topic that is apparently too vulgar to mention—at least in the U.S.

As an American, I feel obligated to provide the following disclaimers before continuing:

As reported by The Telegraph, the U.S. Patent and Trademark Office (PTO) denied a request for federal trademark registration for the word “Comfyballs,” the brand’s desired name for its innovative, male-only “comfort-where-it-counts” line of underwear.

The reason for the PTO’s rejection? Balls—yes, literally, balls. Apparently the PTO is quite concerned about our nation’s ability to handle any reference to the “vulgar” male anatomy.

"In the context of the applicant's goods, the mark, ‘COMPFYBALLS’ [sic] means only one thing—that a man's testicles, or 'balls,' will be comfortable in the applicant's undergarments," the PTO's denial reads. "The mark does not create a double entendre or other idiomatic expression. It is a straightforward use of the word 'balls' instead of testicles."

I wonder if “Comfytesticles” would be approved?

“The trademarks ‘Nice Balls’ and ‘I love my balls’ have recently both been approved by the [PTO],” he said. “Luckily, Europeans have a softer view on what is deemed to be vulgar and the EU allowed Comfyballs to trademark without hassle earlier this year.”

The ballsy boxers were better received in Australia, New Zealand and the UK after initially launching in Scandinavia in 2013. Unfortunately, American men won’t be enjoying Comfyballs anytime soon: Comfypals, on the other hand, are oddly similar—and much less “offensive.”

Related: Quentin Tarantino Unchained: The Making of an Entrepreneur

In a country that serves Rocky Mountain Oysters, watches South Park (“Chocolate Salty Balls,” anyone?), and once dined on Ben & Jerry’s “Schweddy Balls” ice cream, it does seem silly to solidify the notoriously ambiguous “vulgarity” line based on a pair of boxers and a name.