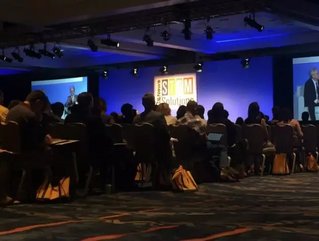 On June 29, representatives of the business and science communities at large descended on the Manchester Grand Hyatt in downtown San Diego, Calif. for the STEM Solutions conference.

The event, which continues through July 1, brings together key business leaders, political figures and innovators throughout American industry to draw attention to the declining number of youth going into science, technology, engineering and mathematics (STEM) fields. Organized by U.S. News & World Report, a number of major industry sponsors, including Chevron and Raytheon, are seeking innovative solutions to the problem, which they say is leading to a severe drop in qualified applicants as compared to a skyrocketing number of jobs in technology and mathematics.

“Right now if you look at the STEM pipeline, it looks like a California aquifer,” Kelly said to a room of mostly out-of-towners.

Kelly took the opportunity to unveil an updated version of the STEM Index, produced in partnership between U.S. News and Raytheon. The STEM Index measures the convergence of a number of factors in STEM in both employment and education.

The new, updated STEM Index recorded a slight increase in overall STEM activity, but showed “remarkably little progress toward decreasing racial and gender disparities for interest and aptitude in STEM.”

“STEM, for many companies now, is a business problem that has to do with the survival of the company,” Kelly said.

After an opening panel, which included officials from the Hispanic Association of Colleges and Universities, the Aerospace Corporation, UNCF and the chancellor of the California State University system, U.S. Department of Labor Secretary Thomas Perez took the stage to address the role that the federal government plays in promoting STEM education.

“We need STEM in every zip code,” Perez said, highlighting the disparity in STEM funding and promotion in predominantly minority areas. “Zip code should not determine destiny.”

Study turns notion of business leadership on its head

The 'boring' details behind entrepreneurial success ...