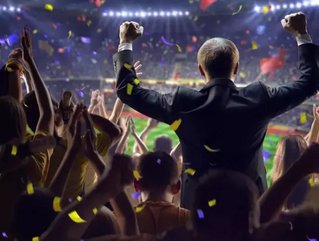 A football club needs to win – success on the field is what attracts the top players and creates scenes of euphoria in packed stadiums. It took Toronto FC 11 years to achieve 100 regular-season wins, but that seems to have changed. With six title wins from the past nine, Toronto have gone on to virtually dominate the Canadian Championship.

The club is looking hard to beat, not just within Canada but across North America. The Reds were undefeated at home this season with six wins and two draws, their latest victory at the time of writing being a 2-0 win against DC United on June 17, in which Sebastian Giovinco set up goals for Jozy Altidore and Jordan Hamilton in front of 28,627 ecstatic fans.  That's a sell-out at Toronto's BMO Field, and another tick against Bill Manning's to-do list.

Manning is a survivor in a notoriously ruthless environment. A successful player at college and beyond who went on to become a US Soccer National “A” licensed coach, he went into sports management in 1993, graduating to the MLS in 2000 as President and General Manager of Tampa Bay Mutiny; named MLS Executive of the Year by the Washington Post.

Before coming to Toronto in 2015 Manning held leadership roles at Philadelphia Eagles, the National Basketball Association’s Houston Rockets and Real Salt Lake of Major League Soccer (MLS being the top tier of the sport across North America). But it's a mistake to think running sport is just like running any other business, he warns: “I have seen a lot of very wealthy, smart people get into the sports business and try to run it like their other businesses – and fail miserably.”

Manning arrived at TFC at a time when the club was trying to recover from an extended visit to the doldrums. “When I came in my task was to provide some stability and consistency. Toronto FC had had nine coaches in 10 years, six general managers, and I was the fourth president in that time. Hundreds of players had gone through over that decade and continuity and stability were noticeably lacking.”

The foundations of recovery had been laid with the appointment of general manager Tim Bezbatchenko and chief coach Greg Vanney in 2013 and 2014 respectively. Manning joined this triumvirate with the task of ensuring a consensus in order to build the foundations of a successful franchise. “The key job I had was to bring consistency, stability and, of course, leadership.”

As the loudest voice among strong personalities, consensus building is at the core of Manning’s management style, which he otherwise characterises as democratic dictatorship. “I believe in people; giving them leeway to do their jobs, and frank and open communication. If you give them the support they need they can do great things.”

Manning’s experience gives him authority, and that's something that can only come with time. He says he wishes he'd known at 41 what he now knows at 51, but recognises the intangible nature of experiential learning, a big part of which he says is learning from one's mistakes.

The unusual thing Manning’s colleagues notice about him, he believes, is his eye for detail. The first thing he latched on to when he joined was not the five-year strategy, but the imagery on the club’s publicity photos; it focused too much on the star players, a keen eye he moved to team consciousness. “For me the little details can be very important. I like to see that everything is aligned. If something is out of alignment I usually catch it!”

The day to day relationship between Bill Manning, Bezbatchenko and Vanney is absolutely vital – other clubs take note. They don't always agree. If, however, one of the three passionately disagrees with a proposal, that path is not taken and another way found. Much of the time, such is his faith in these colleagues that his role boils down to supporting what the General Manager and Chief Coach wish to do, and that's how he likes it. “Being aligned is the main thing, and there's no confusion that our job is ultimately to win championships – we are all going to do whatever it takes to do that,” Manning says.

The best players are expensive, but what happens on the pitch defines the club. Clubs that tend to have a consistent group of players over time appear to do better than clubs that experience significant churn. The approach to the team has changed now, and Manning is happy to have been able to replace the ‘complete squad overhaul’ that seemed to happen annually, with fine tuning.

“The more people following your team the more merchandise you sell, and the greater the number of people who come to the stadium the more concessions we can offload. Business success all goes back to success on the field.”

Back in 2014, TFC had lost its way on the field and fans were deserting the stadium. Manning credits much of the rebirth of the club to the former CEO of MLSE Tim Leiweke, who enabled the club to engage some top players like the British striker Jermain Defoe and current captain Michael Bradley. “The fans responded by coming out to support us, and the teams started to do better. I had the opportunity after Tim left to continue to move forward and so far, it has gone well.”

Maple Leaf Sports & Entertainment (MLSE), the parent organisation not only of TFC but also of Toronto's hockey and basketball clubs, the Maple Leafs and Raptors, is the operator of the BMO Stadium. The Maple Leafs are the senior partner, going back a century, now led by Brendan Shanahan. Meanwhile, the Raptors have experienced huge success in recent years under Masai Ujiri. Manning has deep respect for his fellow presidents, and there's no feeling of rivalry, he says, more a kind of corporate team culture reflecting what each of these leaders expects on the field.

MLSE takes care of the back office, allowing each of its pillars to develop independently. If he had any fears that soccer would be sidelined by its older, more mature partners, these have been dispelled. “TFC is a big beneficiary of the best practices across the other two teams,” Manning explains. “One of the great things about MLSE is that it's putting so many resources behind TFC and we feel on an equal standing with the other teams.”

Manning feels that TFC's ceiling is now higher. Soccer is growing fast in both Canada and the USA. Now that it looks like CONCACAF will host the 2026 FIFA World Cup in a joint bid between Canada, the USA, Mexico and the Central American and Caribbean nations, with 10 games booked for Canada, the sport can expect to go into turbo drive.

“I was in the US in 1994 when they hosted the World Cup and saw how it boosted soccer there,” Manning recalls. “We can do that for Canada in 2026.”

There is so much potential for Canadian soccer in general, and for Toronto FC, in particular, to grow. Last Saturday's sell out is a pointer. The average attendance is 26,000, but there's still headroom. Season ticket holders number 21,000, and if Manning can achieve his target of raising that to 24,000, and the renewal rate from its current 91 to around 95%, every game would be a sell-out.

Then the club could look at its pricing: the average ticket price is a modest $39, and the Toronto market can definitely sustain a reasonable increase. They also want the introduction of flexible pricing using the model adopted by the Raptors, where you pay more to see a match against a highly rated competitor. But that can only happen as long as the team keeps winning.

The next big challenge for Bill Manning, Tim Bezbatchenko and Greg Vanney will be to retain its hold on the Canadian Championship, which it won last year. Later this year they, and the entire population of Toronto, will be rooting to overturn last year's result in the MLS Cup, when TFC narrowly missed out to Seattle Sounders by 5–4 in a penalty shoot-out after a goalless 120 minutes (with overtime).