Big business slowly gravitating towards being more B Corps 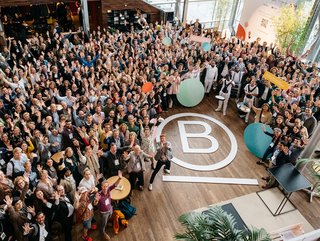 Just 2% of B Corps are multinationals, but the movement is growing in big business, marking an important step in driving economic systems change at scale

When Danone North America was certified B Corp in 2018, it became the largest global company by a factor of two to achieve B Corporation certification.

With US$6bn in sales, the subsidiary of Paris-headquartered food product multinational set the stage – not just for Danone’s other subsidiaries to follow suit but for other multinationals to take up the mantle for business as a force for good.

B Corp is a movement of companies verified to be meeting the high standards of social and environmental practices and standards set by the non-profit B Lab, which issues the certification in its mission to make businesses “a force for good”.

Four years on and 70% of Danone’s global sales and more than 45 of its brands are now covered by B Corp certification, marking significant progress towards Danone’s ambition to become the first completely certified food multinational by 2025.

Multinationals comprise 2% of B Corps but are growing

While B Corp certification is for businesses of all sizes, small and medium-sized privately owned businesses make up the bulk (98%) of companies that have achieved certification since B Lab launched B Corp in 2006.

Of the 5,700 B Corp companies, 90 are multinationals, meaning they have over US$1bn in annual revenue. And while this is only about 2% of B Corps by volume, these businesses represent a significant portion of the B Corp workforce, with 28% of B Corp employees worldwide working at a multinational.

Take B Corp-certified multinationals Bonduelle, Gerdau, Givaudan and Magalu, which cumulatively represent approximately US$60bn in revenues and have 250,000 employees.

Among other multinationals – Nespresso, a subsidiary of Nestle; Ben & Jerry’s (Unilever), Patagonia, Athleta (Gap Inc), and cosmetics company Natura (Colgate-Palmolive) – the latter becoming the largest publicly traded company to certify as a B Corp.

And B Lab is keen to get more multinationals on board with the B Corp movement.

Recognising during the pandemic that the future of business had irrevocably changed, and that corporate leaders required an entirely new playbook, the non-profit launched B Movement Builders, an initiative with an initial cohort of six companies (including Bonduelle, Gerdau, Givaudan, Magalu and Danone) designed to bring together multinational brands working to improve the role of business in the world.

It marks the first initiative of its kind to pave the way for larger businesses to get involved with B Corps and to leverage their unique skill sets to address the impacts of climate change, racism, and other forms of oppression in the global economy.

Balance between reputational standards and changing the world

Not everyone is happy about multinationals becoming part of the B Lab movement, as they believe this goes against the original mission of B Lab – to change the way capitalism works in order to save the world.

Nespresso is a case in point. Following the B Corp certification of the Nestle-owned coffee company in April this year, B Lab faced a backlash. Some 30 certified B Corps signed an open letter to B Lab protesting the coffee maker’s certification, pointing to a history of child labour and wage theft on farms, that grow its beans, along with reports of abuse of factory workers.

The B Corps argued that B Lab risked undermining the authority of the B Corp mission.

B Lab contests this, arguing that not only is its standards and processes for multinational B Corp certification more rigorous, but that bringing multinationals into the movement is important to the mission.

“B Lab will not be revoking Nespresso’s certification due to the open letter,” Alexa Harrison, Senior PR Manager at B Lab US and Canada said in response. “Nespresso, following an intensive three-year process, has met all of the certification requirements – which include scoring a minimum of 80 on the B Impact Assessment, meeting the legal requirement; a risk assessment, disclosure and transparency; as well as additional requirements for a company of its size.”

It’s a difficult balance to maintain between protecting the reputational standards and rigour of the B Corp certification while also bringing in new members.

But for B Lab, and other sustainability advocates, getting multinationals certified is an important step in its mission to transform the global economy – and a logical step in scaling systemic change.

“When multinationals show leadership on positive social and environmental performance, and take steps to minimise their negative impacts, they are working not only to improve their own practices, but to drive economic systems change at scale,” says B Lab.

Simply put, when the biggest companies are working to be better for the world, they influence the broader business ecosystem to do the same.

B Lab argues that “the size and impact of multinationals, as well as their greater influence on the economy” means that they can be valuable members of and advocates for the B Corp movement – if, and when they meet B Lab’s rigorous standards and requirements for certification.

Standards and criteria for multinational B Corp certification even more rigorous

And the standards and requirements for multinational certification are even more rigorous than for other sizes of business, B Lab says.

“If anything, it is more difficult for a multinational to certify than a smaller group,” says B Lab.

To start, not all multinationals in any industry can pursue certification, with coal, casinos, and prison operators excluded, while for other controversial industries, specific requirements are required to be met.

And then the standards themselves, and the processes designed to verify whether a company is meeting them, are higher for larger companies – “largely a recognition that the obligations to stakeholders are greater when a company has greater scale, influence, and impact.”

Not only are the indicators of the B Impact Assessment adjusted to a company’s size, but US$5 billion-plus parent companies are required to meet additional Baseline Requirements in order to be eligible – and achievement of these is reviewed by the Multinational Standards Advisory Council (MSAC), an independent governing body set up in 2020 and composed of a multi-stakeholder group of experts to ensure application of the B Corp and B Movement Builder performance requirements to multinationals.

More stringent criteria and standards are just one of the many challenges faced by multinationals wishing to undergo certification. 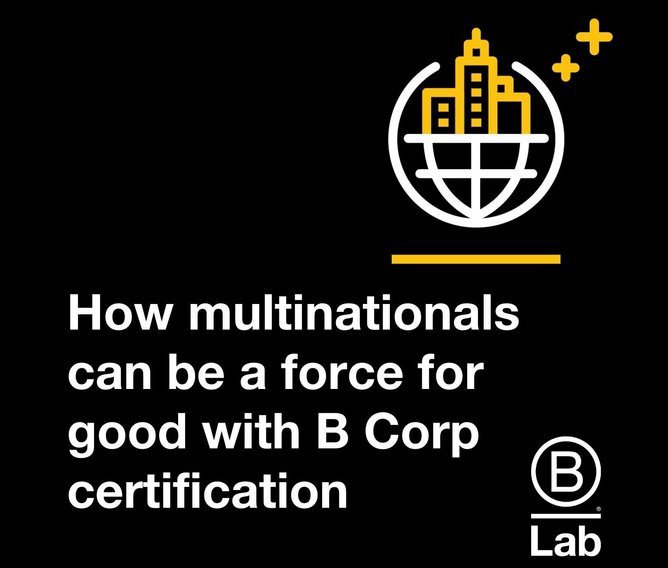 Applying to become a B Corp – two pathways to certification

The latter approach, one that is relatively resource-light for the parent company, organically building buy-in and momentum, and making the process of meeting the legal requirement easier for the subsidiaries, is one taken by Danone.

Since 2015, Danone has partnered with B Lab and over time, one by one, achieved certification for its numerous brands and subsidiaries.

Of Danone’s more than 45 brands and numerous subsidiaries, from The Netherlands to the UK, Italy to Oceania (equalling 70% of its global sales) now covered by B Corp certification, the average B Impact Assessment score is 90 – a minimum score of 80 is required to certify.

Multinationals and the B Corp movement