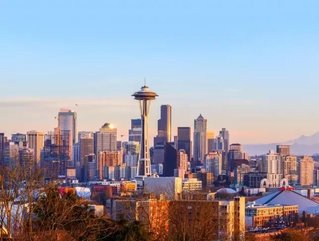 Situated on an isthmus between Puget Sound and Lake Washington, Seattle is the capital of King County and the largest city in the state of Washington. Home to approximately 730,000 people, it is the 15th largest municipality in the United States and is in the process of becoming a top-tier contender for the crown of America’s premier tech city. According to a report released in October 2018 by CBRE, the Seattle area added a combined 33,803 tech jobs in 2017 and 2016, for a total growth of 25.7% in the sector, the highest of any city in the US.

According to a GeekWire report, Seattle supports 165,264 high tech software and services jobs, representing 42% of all office jobs in the city. Some of the United States’ largest and most influential tech firms call Seattle home or are significant employers in the area, including Amazon (approximately 40,000 people), Microsoft (approximately 45,000), Accenture (over 1,200) and Google (over 2,000).

Located south of Seattle’s iconic Pike Place Market, fewer than ten blocks from Seattle University, Pioneer Square has, over the past few years, become a nerve centre of the city’s startup ecosystem. According to a TechCrunch report, “the original heart of the city, the area has managed to hold on to its decades-old charm as other parts of town are besieged by Amazon-contracted architects.”

Taking its name from the vibrant neighborhood, Pioneer Square Labs (PSL) has established its HQ at its center. Founded in 2015, PSL is an innovative startup studio that creates, develops and tests new business ideas. TechCrunch reports that “PSL’s team of former founders and venture capitalists, including Rover and Mighty AI founder Greg Gottesman, collaborate to craft and incubate startup ideas, then recruit a founding CEO from their network of entrepreneurs to lead the business. The team uses an innovative method of rapidly ideating, testing and, if necessary, scrapping ideas, dubbed its validation engine.”

“It’s a dream job,” PSL co-founder Greg Gottesman told TechCrunch in March 2019. “If someone would say to you ‘hey, you can come into work every day, think about all the problems that are interesting to solve, all the tech that’s available and you have the resources to build companies,’ that’s just a dream come true … It’s just been a very fun ride.”

The lab’s model is proving to be a success: all 13 startups emerging from the Lab over the past three years have raised money through follow up rounds to the tune of US$200mn. According to data from PitchBook, startups developed by PSL accounted for over 13% of all early-stage venture capital funding in Washington State over the course of 2018.

Since October 2018, PSL has spun off a number of innovative new companies that are making their way towards maturity. Business Chief takes a look at three of them: compliance automation startup Shujinko, debt collection company Attunely and real estate marketing tech firm Remarkably.

Shujinko - compliance in the cloud

Spun off from PSL in October 2018, Shujinko launched with a $2.8mn round of seed funding to further develop its software-as-a-service offering designed to help companies replicate compliance systems from old infrastructure as they transition to the cloud.

According to a GeekWire report, for many companies, the transition to cloud-based services like Amazon Web Services or Microsoft Azure comes with one potentially damning drawback: systems the companies use to certify compliance with various business regulations – like PCI standards for storing and processing credit-card numbers or the HIPAA regulations applied to healthcare companies – need to be rebuilt from the ground up.

Shujinko’s business model involves a service through which companies can build cloud environments with inbuilt compliance standards. The software also monitors a company’s customers’ infrastructures, helping to avoid “configuration drift” as tweaks and updates are applied.

“We’re trying to eliminate the pain and agony of compliance in the cloud,” said Matt Wells, co-founder and chief technology officer at Shujinko.

Founded in 2015 by Anna-Lea Dieringer and Erina Malarkey, Remarkably is seeking to digitally transform the way in which money is spent on marketing in the commercial real estate sector.

“You have the largest asset class in the world and it currently has one of the most unsophisticated marketing and analytics functions,” Malarkey said in January, according to a GeekWire report. “People are literally managing billions of dollars of assets with sticky notes, emails, spreadsheets, and whiteboards. It’s pretty mind-boggling.”

Malarkey and Dieringer previously led a real estate marketing consulting firm in Seattle called VMO and the pair have brought their ethos and real estate expertise to the venture, combining it with powerful data analytics software.

Remarkably’s software analyzes data gathered from both internal and external endpoints, providing descriptive and prescriptive analytics to aid the company’s clients when distributing marketing budgets. GeekWire also reports that the company is building machine learning and automation technology into its software that can provide more robust marketing-related recommendations.

“We bring together this very unique combination of deep expertise with real estate branding and marketing, and then couple it with the powerful capabilities of software, machine learning, and data automation,” Malarkey said. “We think that is a pretty powerful and unusual combination.”

The company has generated $800,000 in seed money from PSL’s own venture capital arm, as well as from VTS co-founder Brandon Weber and Cephas Partners Managing Partner Mollie Fadule.

Led by former Starbucks and aQuantive executive Scott Ferris, Attunely is a machine learning-driven analytics company aimed at helping debt collection agencies identify which of their clients are most likely to pay or renege on a loan.

According to GeekWire, when a company fails to receive payment from a customer, they hire a debt collection agency to recover the money. Attunely’s digital offering helps those agencies identify which debtors are most likely able to pay, as well as a recommendation for how to best communicate with the consumer. The software achieves this through data analytics relating to debt records and consumer interaction history, in addition to other information such as macroeconomic trends.

In February 2019, Attunely announced its spin-off from PSL. It also gained $3.7mn in funding that helped to launch its machine learning platform, which is commercially available to over 4,000 third-party collection agencies, debt buyers, and collection law firms in the Accounts Receivable Management (ARM) industry.