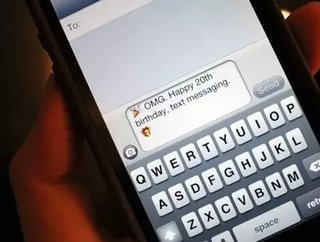 The text message isn’t just for the young anymore, but also the young at heart. In an average week, 95 percent of American adults with cell phones talk on the phone with text messaging weekly reaching 59 percent. In the 18-24 demographic 89 percent talk on their phone while 89 percent text.

In the end, texting is still more popular with younger demographics with interesting figures for text messages by hour. Text messages are sent around the clock from the early morning to late evening. One astounding figure proves just how much texting is being utilized. Whether awake or asleep, 37 percent of 18-24 year old Americans receive text messages at 4 am.

The creator of the text message probably did not realize just how much text messages would become a part of the population’s daily life. While texting is popular now, it still is second to mobile calls. For 18-24 year olds, texting is more popular in the late hours from 11 pm to 6 am, utilized as a means of communication when recipients are probably asleep.