Chevy and Enterprise partner up to bring more EVs to Orlando 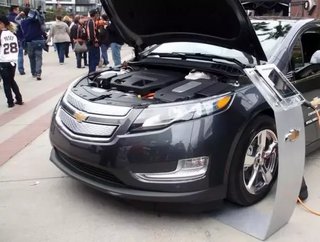 In a new attempt to go increasingly green, the city of Orlando’s officials have partnered with Enterprise Rent-A-Car, Chevrolet and others to add another 14 electric plug-in Chevy Volts to Enterprise’s local rental facilities for tourist use.

As our sister site Energy Digital reported, even though the number of Chevy Volts at Enterprise’s Orlando locations is limited, the company intends to add even more electric vehicles in the future. But with over 300 plug-in stations to recharge the electric engine throughout the region, travelers vacationing in the area won’t need to use much gas when checking out the sights and scenery.

Volt has catapulted itself into the top spot among plug-in hybrid (PHEV) sales behind an estimated electric range of 380-400 miles per gasoline fill-up. Its versatility of driving around town as an electric car as well as ability to use gasoline for longer road trips makes it very desirable in today’s market.

“Here in Orlando, we pride ourselves on being a sustainable, cutting-edge community and a place where leadership and partnership come together to do amazing things and tackle big challenges,” said Orlando mayor Buddy Dyer. “That’s one of the reasons why we’re proud to show national leadership when it comes to sustainability, and that includes advancing the adoption of electric cars both here in our backyard and across America.”

This coincides with a plan funded by the energy agency of New York State to create regional tourism networks promoting car rentals with hotels and attractions that have EV charging stations.

The study called “EV Tourism in the Empire State,” reveals the plan for New York’s popular Hudson River Valley and Catskills areas. Unlike similar EV feasibility studies in other parts of the country, this particular study is, "The first to focus on people that don't already own cars," say authors Adam Lubinsky and Paul Salama, two planners with WXY.

The next step is promoting the "EV tours" to city residents and young families, most of which don’t own cars and tend to be eco-conscious consumers.

The EV tourism packages will be all-inclusive deals such as train tickets, EV rentals, wine tours and hotels, all with convenient charging stations.

But will "green weekend" getaways increase the use of EV? According to the planners from WXY Architecture + Urban Design, it will. In addition, electric car perception and demand will increase as well due to EV tourism.

"Promoting these attractive destination clusters and forging creative, strategic partnerships could spark the emergence of a viable ecosystem that supports broader EV adoption here and eventually, across the nation," says Lubinsky.