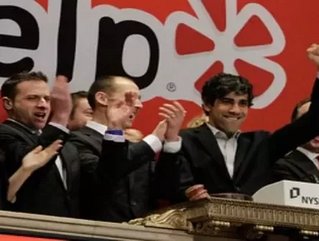 Online reviews site Yelp made its stock market debut Friday with a bang. Yelp shares were up as much as 73 percent Friday morning, including a 66 percent surge in the first half hour of trading.

Market-watchers were caught off guard by Yelp’s break out and pricing of $26 per share as the company had priced shares at $15 on Thursday evening. Its targeted IPO range was $12 to $14 per share.

The eight-year-old site, which has yet to turn a profit, estimates that it will net about $96 million from the offering after expenses.

Some analysts say that although Yelp is the current clear leader of the review site genre, but that doesn’t make it a sure thing. Yelp’s IPO filing revealed that Google, its top competitor, drives the majority of its traffic and it faces a considerable amount of competition for local advertising—its largest source of revenue—against both Google and Facebook.

“Yelp’s active community of users writing reviews of local businesses is difficult to replicate,” Morningstar Analyst Rick Summer said. “Unfortunately, the company faces challenges translating the small advertising budgets of local businesses into profitability, as about 70 percent of ad revenues are eaten up by sales and marketing expenses.”

Media and advertising advisor BIA/Kelsey says that the online local advertising market could jump from $26.4 billion this year to $37.9 billion in 2015. Yelp has said it plans to start hiring an international sales force this year so that it can offer ads in overseas markets and CEO Jeremy Stoppelman says he predicts that Yelp will soon play a significant role in users’ daily Web browsing.

“We see a huge opportunity to become the strongest brand in local, much like you see with Amazon,” Stoppelman told Bloomberg Television. “We see Yelp occupying that space with content. Whatever business you need to go to, we’re going to have the best content for that. You’re going to go to us day in and day out.”