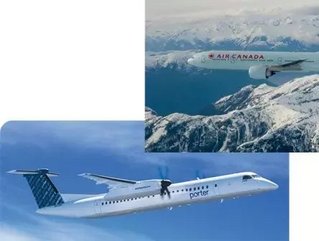 Porter and Air Canada today have announced plans to make ticket purchases easier for consumers. Introducing advertising that shows the full cost of a flight including all taxes and fees, the airlines advertisements will display a single, simple number.

For Air Canada, this announcement is part of the company’s 75th anniversary yearlong celebration.  Starting the year off, Air Canada is introducing its all-inclusive price advertising where ticket prices will be advertised with all additional taxes and fees upfront. Additionally, announced today, Air Canada has kicked off its world-wide seat sale.

"This is a seat sale that has been 75 years in the making and Air Canada is pleased to offer customers a chance to celebrate our milestone birthday by putting the world on sale until February 16. With these special fares, Air Canada is introducing a new, all-in approach to advertising fares that will prominently display a final price accompanied by a breakdown of the base fare plus the total cost of additional charges, such as taxes, fees and surcharges. Our all-in price advertising initiative is a response to our customers' increased desire for transparency and simplicity when shopping for air fares, whether they do so through print advertising, online searches or by signing up for our webSaver email specials," said Craig Landry, Vice President of Marketing at Air Canada.

Air Canada isn’t the only one who has announced its new ticket advertising guidelines today. Porter similarly announced that its advertised flight costs will now include all surcharges and mandatory fees starting February 10th.

"Unlike other carriers, Porter will show one price for the customer without highlighting fees and taxes separately," said Robert Deluce, president and CEO of Porter Airlines. "We've been able to change what passengers expect from an airline by introducing standard premium amenities and affordable flights. Now, we're extending this experience to the booking process, making it easy to immediately understand how much a flight costs by showing one number."

These aren’t the first Canadian airlines to adhere to new government regulations or even the first to launch the advertising pricing with a seat sale. WestJet, beat both Air Canada and Porter to the punch with its launch of all-in pricing.

Why are all these airlines jumping on board with new ticket pricing policy? Announced by the federal government in December 2011, airlines must advertise the full cost of flights by Christmas 2012. Now the question is: which Canadian airline will follow suit next?