Canadian Advertising and the Digital Frontier in 2012 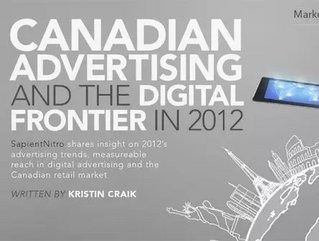 When it comes to emerging advertising trends, there isn’t just one. Nonetheless, SapientNitro’s Toronto office has noticed a major advertising trend of emphasis on mobile. But, this emphasis comes at a price where SapientNitro believes marketers will have to change their attitude about approaching consumers.

The beauty of mobile in a way for consumers is it’s really easy to shut out the advertising. On the web it’s kind of hard and on TV—I don’t care what they say about DVRS—with that kind of model it’s hard to shut people out. I think that is where marketers are going to have to change how they approach it. There’s this new kind of respect and a new utility and value that you need to provide,” said Elliot Smith, Creative Director, SapientNitro Toronto.

With that respect, marketers will gain entrance into a new world of brand promotion and potential brand loyalty. Mobile devices are leading advertising into a new frontier that features an extreme emphasis on digital.

“It’s how people do business now. It’s not advertising anymore, it’s how consumers interact with the company—how they buy and sell and utilize the services. I wouldn’t give it up now, we’re too far now,” said Steven Koch, Associate Creative Director, SapientNitro Toronto.

What comes with the digital territory is the fact that marketers no longer know when or where consumers will see their message. A brand’s message needs to be relevant in any situation.

“There needs to be this kind of fluidity to your content, in terms of how you start thinking about your content. ‘What is that extra value?’ is what we talk about providing. How do we always be additive to people’s lives, where advertising is traditionally subtractive? It’s been this ‘put up with this sponsored moment’ to get whatever you want, and I think that’s changing now… You have to actually give value,” said Smith.

Digital advertising provides something to advertisers and businesses that traditional advertising never has: measurable reach. There are benefits to this measurability in the way that, if a business is nervous about a campaign, the advertiser can make two different versions and measure which one is more successful.

“The paradox is that it’s less risky now because you can measure it. We have weekly meetings. We talk about what’s happening, where people are coming and going. If we’re not getting enough people we can say ‘Let’s change this or let’s fix this.’ There’s more value created because we can monitor all the time. We’re always on top of it,” said Koch.

Instead of creating campaigns based off of a gut feeling or a brand’s legacy like with traditional advertising, digital advertising can show a campaign’s worth. As creatives in the advertising field, SapientNitro has recognized the need for change.

“This is definitely where, as creatives, you have to evolve. One of the reasons I joined SapientNitro is because they don’t understand a world that’s not changing. They are very, very uncomfortable with the status quo,” said Smith.

With the entrance of US companies into the Canadian retail market in 2013, such as Target, it’s clear Canadian companies will have to step up their game to compete with the successful retail behemoths. Koch warns Canadian retailers that the relationship between client and customer has changed. Customers have more control over brand interaction and are able not only to be heard, but can share their opinions with others. The advertising relationship has become a dialog and thus, customers can influence whether brands succeed or fail.

As 2013 looms closer, Canadian retailers, says Smith, will need to redefine their brands in the wake of a highly competitive market. “I think the Canadian brands have gotten away with being fuzzy for a long time in terms of what they do best and what they represent to Canadians, and that’s because there hasn’t been a lot of competition… The broad shallow play just isnt going to work anymore.”

To get ahead of the game, SapientNitro recommends putting more emphasis on digital.

“It becomes an uncomfortable question: Where are my customers seeing the value and how can we leverage it in a meaningful way? I think mobile is gonna be huge for retail again contextually. The beauty of mobile is that retailers can understand where you are and again if they can understand the context, they can deliver content that is meaningful to you. Mobile devices are so personal. The way they use them and what they put on them—you just want be a part of that mix. Otherwise you’re not being carried around. If you’re not in the aisle with them, you’re cut out of a key moment of the customer’s mindset,”  Smith concluded.