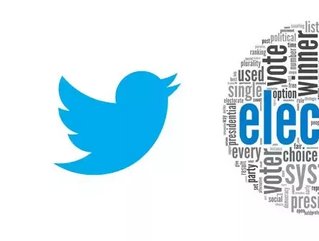 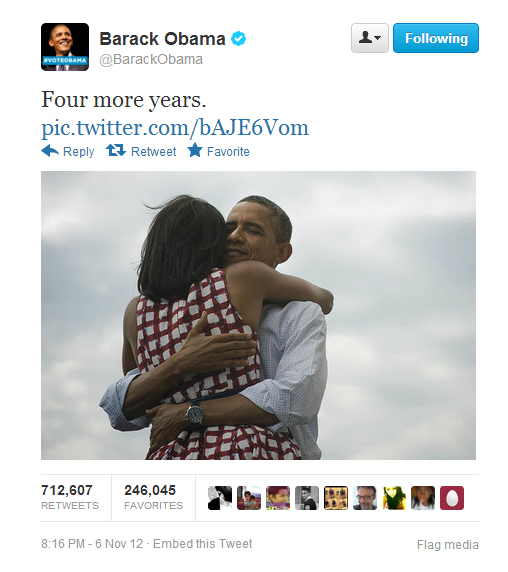 As of late Tuesday night, the tweet had been retweeted by other users on the social network 455,000 times, explained Twitter. As of this article, the Tweet has been shared, 712,607 times, the most retweeted post on the network to date claims mediabistro. President Obama’s tweet has thus broken a record on Twitter as the most retweeted post of all time, a record previously set by Justin Bieber in September.

President Obama wasn’t the only one tweeting about the election. Overall, the election caused a flurry of activity on Twitter Tuesday night, resulting in a peak of 327,452 Tweets per minute (TPM) when media networks called President Obama’s re-election.

Twitter seemed to be a place for many to share their reaction to the US election with International leaders such as David Cameron, Mohd Najib Tun Razak and Julia Gillard congratulating President Obama on his victory, and other victory tweets from those elected by constituent such as Elizabeth Warren, Gov. Tim Kaine, George Allen, Ted Cruz, Paul Sadler and more.

With candidates’ commitment to getting the word out through any outlet they can, it has become more and more clear the Internet is playing a more important role in election coverage.

President Obama, this election cycle, even reached out to the popular Internet site Reddit.com posting an Ask Me Anything (AMA) in which users were encouraged to ask the President questions that were important to them in their Presidential Election decision making process. Even further, President Obama returned to Reddit on Tuesday asking its users to participate in the voting process.

With the participation current elected officials utilized in this election, it seems any candidate hoping to compete successfully in the future will have to incorporate the Internet audience into its campaign.