Did we overreact to the Telsa Model S fires? 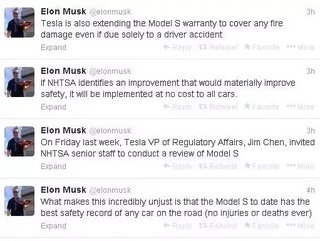 It’s no secret that people have been up in arms about the high profile Telsa Model S fires. In true fashion, everyone has completely overacted causing a temporary drop in the luxury car company’s stock price which proved to be momentary as stock prices rose shortly after the drop. Tesla Motors stock spiked Tuesday, rising as high as $129.00 a share after dipping to $115.60 in pre-market trading.

Founder Elon Musk is unconcerned about the ability for Tesla is rebound, and while he has paid special attention to safety concerns he writes in the company blog, “Since the Model S went into production mid last year, there have been over 400 deaths and 1,200 serious injuries in the United States alone due to gasoline car fires, compared to zero deaths and zero injuries due to Tesla fires anywhere in the world.”

The fires were caused by a puncture to the battery after hitting highway debris. Engadget writes, “Even after firefighters punctured the battery's protective cover to extinguish the fire, it never reached the passenger compartment.”  The drivers of the three Model S Tesla's that caught fire after hitting road debris left the incidents free of any injury and praised the car for helping them escape any harm.

Telsa posted a blog post from one of the Model S owners that was affected by the recent fires showing they are not afraid to take notice of concerns and face them head on. The customer writes,

“Had I not been in a Tesla, that object could have punched through the floor and caused me serious harm. From the time of impact of the object until the time the car caught fire was about five minutes. During this time, the car warned me that it was damaged and instructed me to pull over. I never felt as though I was in any imminent danger. While driving after I hit the object until I pulled over, the car performed perfectly, and it was a totally controlled situation. There was never a point at which I was anywhere even close to any flames.”

The owner goes on to say,

“No flames ever reached the cabin, and nothing inside was damaged. I was even able to get my papers and pens out of the glove compartment. This experience does not in any way make me think that the Tesla Model S is an unsafe car. I would buy another one in a heartbeat.”

Musk took to Twitter with a series of tweets defending the Model S.

He even made a clever joke to lighten the mood.

All the drivers were instructed by the car to pull over after the incident and nobody was injured. This raises the question, is the high profile nature of the Tesla brand the reason the fires were highly publicized causing Tesla stock to temporarily plummet?