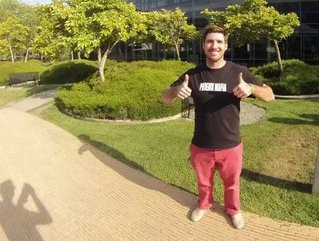 When I went back to college after a few year hiatus I had no idea what to study. I knew the world operated on business principles, but wasn’t sure which aspect of business to study. After my general business classes at the W.P. Carey School of Business at Arizona State University I figured out I wanted to do all of it. The most difficult problem to solve wasn’t finance, marketing, or accounting...it was starting, keeping and growing a business.

Then I started reading about companies selling for $1 billion in 18 months. I didn’t need finance concepts to understand it was a good ROI.

So I dug into startups.

Where to start? Not in college courses. I began reading the Harvard Business Review and blogs, books on venture capital, listening to startup podcasts and doing informational interviews with seasoned founders and CEO’s. My first taste of the startup life came from Tyler Crowley. His advice was to jump in, fail quickly, get back up, and don’t make the same mistake twice.

So my last semester at ASU focused around which startup to jump into. I went with a co-working space that focused on art, music, and coffee. It operated for a year and was a crash course on how NOT to run a business. I made all the rookie mistakes: bad partners, lack of capital, delusional ideas, no practical experience to draw from, trying to run a business off of theory I learned in college. It failed miserably. But what I learned in that failure was invaluable.

I took the leap of faith. I signed a lease on commercial real estate, managed and operated, dealt with conflict, learned inventory management...marketing...accounting...customer service...working for free...losing money...working with creatives...POS systems...tax advantages...how to balance life and work.

The biggest lesson I learned: Business is hard. Startups are harder.

Startups are the most difficult puzzle to solve. Thousands of variables are at play. Controlling them all is impossible. Trying to hold any of the variables constant is like holding an open flame in the palm of your hand. One is attempting to combine the study of psychology, sociology, economics, human behavior (irrational) in the hopes of turning a profit. Systems Theory is your only hope.

The consumer web startups we read about all the time, or Hollywood makes movies out of, are outliers. Most of the time they are lucky success. Google, Facebook, Instagram were not new ideas. Several companies came before them who solved the same essential problem. Why are these the ones that made it? If one knew the answer, they’d be the richest person in the world!

Startups are not a recipe.

Startups are dynamic, fluid, agile, in a state of constant change. What a company is today, is not what it’s going to be tomorrow. If it is the same, it’s going to fail. Startups are a series of small experiments. Product, pricing, promotion, are all rubic’s cubes trying to find the right pivot. Once the colors align, it’s time to arrange the next set of colors. Who’s controlling the pivoting? People.

How did Apple trudge to the top of hardware? They had creative people following a brilliant leader. Steve Jobs found the right people and put them in the right position to succeed. He didn’t hire B+ or A- people...he hired A+ people who shared his vision and passion. He refused to make compromises and challenged the status quo. He zigged when other’s zagged. The outcome was a new digital age: iPods, iPhones, iTunes, iPads, Mac Airs. They forced other companies to rapidly innovate or face extinction. The real winner of the battle? Consumers.

Consumers won. Our pain points got solved. We threw away our CD’s, connected to the Internet on mobile devices, became more efficient, got empowered. Our quality of life improved.

Any idea that solves tangible problems has a chance to succeed. If it saves time, money and feels good, there is a market for it. Put if the wrong people are working it, it’s going to fail. Sometimes quickly, sometimes slowly, but it will fail.