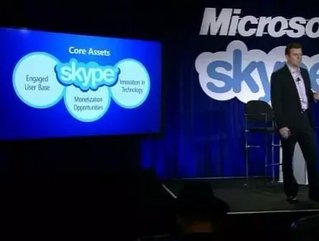 There seems to be some combustion with the Skype and Microsoft acquisition. Microsoft agreed to acquire the Internet-calling service last week and has since been approved by the U.S. Federal Trade Commission. However, senior executives at Skype have dropped ship and have departed from their posts following the $8.5 billion buyout.

With the deal in tow, Microsoft said last week that it would obtain all necessary regulatory clearances by the end of the year. However, Skype vice presidents David Gurle, Christopher Dean, Russ Shaw and Don Albert have been dismissed. Chief Marketing Officer Doug Bewsher and head of Human Resources Anne Gillespie have also been fired. Executives Ramu Sunkara and Allyson Campa were fired, after only joining Skype earlier this year. Reports have come out saying these dismissals were part of a “recent internal shift owing to some management changes in the company.”

"I believe this acquisition is the very best way to extend Skype’s reach and will allow us to bring real-time video and voice communications to more people around the world than ever before. The combination of Skype and Microsoft will directly benefit all of you who use Skype by ushering in a new era of generative ways for everyone to communicate," said Bates.

Microsoft plans to incorporate Skype into a variety of its platforms, including the Xbox and Kinect devices, Windows Phone and other communications services including Lync and Outlook. Skype’s total stock worth has decreased considerably because of its executive dismissals and may affect its $8.5 billion payout value.