What does Trumps warning to General Motors mean for Canada? 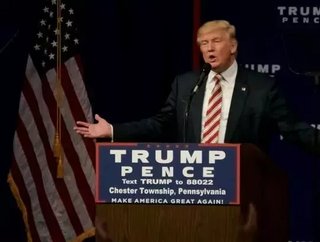 President-elect Donald Trump has recently warned through Twitter that he will impose a "big border tax" on American multinational corporation, General Motors. Trump said this after finding out that GM makes some of its Chevrolet Cruze compact cars in Mexico.

The President-elect told the automaker to make the cars in the US "or pay big border tax!" He did not say any more on the matter however, has previously stated that he will hit big companies that choose to move operations from the US to other countries by imposing a 35 percent tax on the companies exports from the states. GM has defended itself saying that it is part of its strategy to serve global customers.

This news comes after Trump discredited the North American Free Trade Agreement between the US, Mexico and Canada.

The tweet (which was sent from Trumps @realDonaldTrump account on January 3) has so far received over 9,000 replies, more than 18,000 retweets and likes in excess of 66,000.

General Motors stated that around 4,500 hatchback varieties of the car were assembled in Mexico but it sold roughly 190,000 Chevrolet Cruze cars in the states last year with around 185,500 sold in Ohio alone.

Glenn Johnson (the President of the Auto Workers union at the factory) said that the production of the Cruze cars adds up to no more than a day of output at the Lordstown plant.

Trump is due to take place in office as US President on January 20. This is his latest tweet aimed at an American company over jobs, imports and costs.

Shortly after Trump sent out the GM tweet, the automakers rival (Ford Motor Co) released that the company was going to be cancelling its proposed $1.6 billion-dollar plan to build a factory in Mexico and would, instead, invest $700 million dollars into its Michigan factory. Ford announced that they wanted to move the production of the Ford Focus small car to the new factory in Mexico last Spring. The company will still move the production of the small Ford Focus car into Mexico but it will go to a present plant in Hermosillo that currently makes midsize cars.

Ford’s Executive Chairman (Bill Ford Jr.) said that he personally notified Trump with the decision to stop the companies Mexico plans after the President-elects GM tweet earlier that morning.

Ford’s CEO Mark Fields said that Ford would’ve made the same decision regardless of whether Trump became President or not.